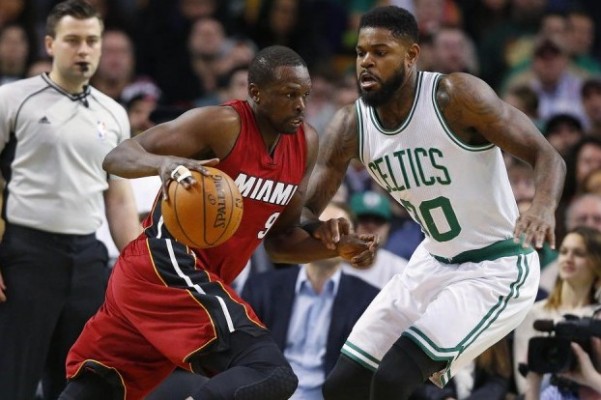 (Boston, MA) – Following a hard-fought 118-112 loss to the defending-champion Golden State Warriors, the Miami Heat (32-26) dropped their second straight game with a 101-89 loss to the Boston Celtics (35-25) on Saturday afternoon at TD Garden.

In what was a highly-competitive game throughout, the Celtics pulled away from the Heat down the stretch after the game was tied at 82 apiece with 7:39 left in the fourth quarter.

As they continue to do all season, the Celtics got balanced production from an array of players on their roster. Backup point guard Marcus Smart led the way in scoring off the bench with 15 points and six rebounds, but Boston had six guys in double figures that scored between 12 and 15 points.

Celtics shooting guard Evan Turner gave the Heat problems the entire game, as he came off the bench for 14 points, a team-high nine assists and six timely rebounds.

With a whopping 20 turnovers, Heat head coach Erik Spoelstra reiterated that his squad needs to be more disciplined at this point in the season.

“These type of games get defined by everything in between,” said coach Spoelstra. “The turnovers were obviously costly for us again, like the first game, but more than that were 50/50 balls, loose balls, and anything that had a momentum played to it. They were winning those battles.”

Despite the turnovers, Miami got a lot of production out of their backcourt starters and reserves. Point guard Goran Dragic led all scorers with 21 points, five assists and five boards, while All-Star shooting guard Dwyane Wade had 19 points, five boards and three assists of his own.

Off the bench, rookie guard Josh Richardson was another bright spot for the Heat on both offense and defense, as he racked up 11 points to go along with two blocks and two steals.

For the 18th time this season, Heat center Hassan Whiteside recorded at least five blocked shots in a game. The NBA’s shot-block leader finished with 13 points, a game-high 15 rebounds and a whopping eight blocked shots. Small forward Luol Deng, who recorded his fifth double-double in a row, had 11 points and 12 rebounds.

Point guard Isaiah Thomas, who was the lone member of the Celtics to make the Eastern Conference All-Star team, compensated for an awful first half to score 11 of his 12 points in the final 24 minutes.

Boston small forward Jared Sullinger was a big factor in the final frame, as he quietly had a double-double with 12 points, 12 rebounds, four assists and two steals.

“In the last five minutes of the game I felt like he got every rebound there was,” said Celtics head coach Brad Stevens on Sullinger.

Up next, the Heat will be right back at it tomorrow night when they take on the New York Knicks (25-35) at the legendary Madison Square Garden. The contest, which is scheduled to tip off shortly after 7:30 pm ET, will be broadcast live locally on Fox Sports Sun.
[xyz-ihs snippet=”Responsive-Ad”]