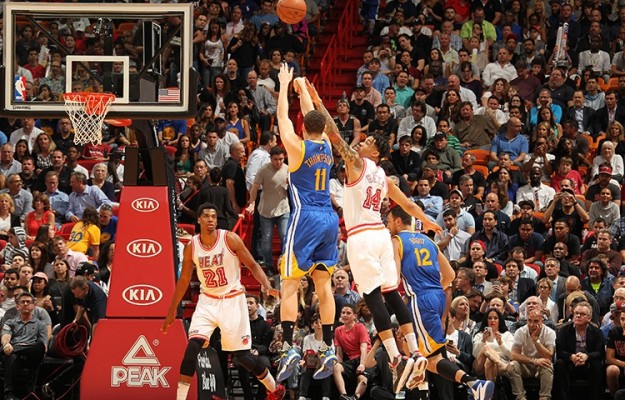 (Miami, FL) — The Miami Heat started fast Wednesday night, but fell short in the end, losing to the Golden State Warriors 118-112. Despite establishing a first-half lead, the Heat were unable to overcome a combined 75 points from Stephen Curry and Klay Thompson, who collectively scored 27 of the Warriors’ final 29 points.

This was a regular season game for the ages. There were 13 lead changes in just the fourth quarter alone, but eventually the “Splash Brothers” made their presence felt and overwhelmed a depleted Heat team. Hassan Whiteside scored 21 points and grabbed 13 rebounds. Luol Deng had 16 and 11, but the story for Miami on the night was the play of Dwyane Wade.

After a poor outing versus Indiana on Monday, Wade came ready to play. He tied his first-half season-high with 18 points, then added 14 in the second half for a season-high total of 32.

“He was disappointed with his game the other night,” said assistant coach David Fizdale on Wade.

“But he was the first one in the gym the next day, working on his game, so it just goes to show you he’s never satisfied.”

Miami was without Chris Bosh for the fourth game in a row, as he’s dealing with the emergence of blood clots in his calf. Despite missing their leading scorer in Bosh, the Heat have managed to find ways to win as they entered tonight’s game riding a three-game win streak. On paper and on the court, Miami was about as good as they could have been on the night, but when facing what may be the greatest team in NBA history, nothing ever seems like enough.

“There’s not a whole lot to say after that one. You’re in the driver’s seat and Curry comes down and makes a couple threes that only a few guys in the league can make,” said Heat head coach Erik Spolestra after the game.

“You just have to credit them for incredible shot-making, particularly in that fourth quarter. There weren’t overwhelming glaring mistakes either, they just make incredible shots.”

“When both guys (Curry and Thompson) have it going, we’re hard to beat. That just shows you how good Miami was. I thought Miami outplayed us for much of the game,” he told the media.

He also added that he felt Miami came out tougher and more ready to fight.

Perhaps, that’s what makes this Warriors team so impressive; even the very best efforts and beyond from opposing teams is simply not enough. Just ask Dwyane Wade:

“We did enough to win the ball game. We just didn’t come out with it (a win). We could play the way we played tonight for the majority of the rest of the season and win most of those games.”

Golden State is now 51-5, on pace for the greatest record in NBA history, while Miami is 32-25, and a half-game behind the Boston Celtics, who they will face on Saturday.
[xyz-ihs snippet=”Responsive-Ad”]