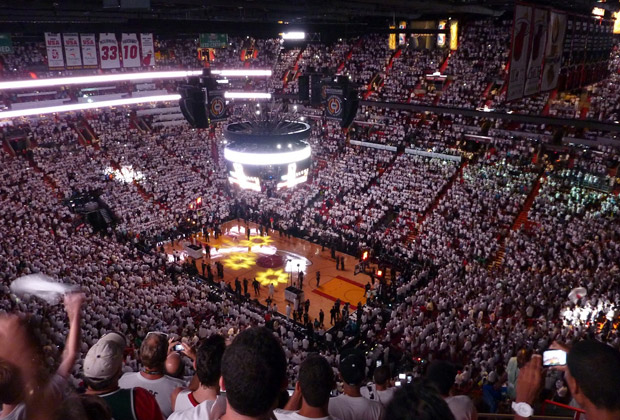 (Miami, FL) — After a huge bounce-back road win, the Miami Heat will face the San Antonio Spurs at home with a tense 1-1 series split. After defeating San Antonio 98-96, the Heat will look to put the Spurs’ backs against the wall hoping to go up 2-1 in the series. Sure, with homecourt advantage it might seem like momentum has swung in Miami’s favor, but when you go up against a brilliant tactician like Gregg Popovich, be prepared for adjustments.

San Antonio is just as capable of stealing one or two games on the road, and considering how slim the Heat’s margin of victory was in Game 2, they can’t get complacent. After Mario Chalmers committed a flagrant foul late in the fourth quarter, it appeared as if the Spurs were going to go on a run that would’ve sealed the deal, but after going 0-4 from the free-throw line, it’s safe to say that San Antonio feels as if they gave the game away, and there’s no question they’ll be desperate to tally a win on the Heat’s homecourt.

For Heat fans biting their nails at the thought of a Spurs road win, relax, the odds are in your favor—not that they necessarily mean anything, however. Sitting pretty as 4.5-point favorites, the oddsmakers like Miami to get it done at home, and considering their record in the American Airlines Arena this season, it’s no surprise as to why they’re favored as such.

Miami boasts a perfect 8-0 home record this postseason, and at home, typically your role players play better. After a pair of lackluster games where he had almost as many turnovers as he had points, Mario Chalmers desperately needs to improve his play. Don’t count on it happening, but if he continues to struggle, it’s possible Heat Head Coach Erik Spoelstra might tweak the lineup to get more production out of his point guards—this could mean upping Norris Cole’s minutes, but a little bit of home cooking might bring the best out of Chalmers and hopefully he can put these issues behind him. They don’t need Mario to play like a world-beater out there; they just need him to make open jumpers. Open jumpers mean more open lanes for attacking the basket, and when you have a world class basket attacker like LeBron James, it’s probably a good idea to keep those lanes clear.

While some of us take comfort in arithmetic, others tend to put less credence in numbers. Despite the odds and trends, Coach Spo isn’t convinced homecourt really means anything. “In this series, I don’t think the [homecourt advantage] is as important,” he said after Monday’s shootaround, “Both teams can win on the road. [San Antonio] is a poised veteran team that’s been through a lot; the crowd won’t affect them much.”

Frankly, Spoelstra is right on the money. The Spurs aren’t the least bit fazed by this recent loss, and Tuesday night is just an opportunity to make things right in their minds. They aren’t a gimmicky team; their mutant Princeton offense can be played on any floor in any arena, and the fact their system incorporates almost every player into a given offensive play ensures the reliance on one or two guys becomes less and less. San Antonio relies so much on collective cohesiveness that even if you think you know what play they’re running, they’re so talented they’ll completely flip the script on you.

Every man has to swing the ball; every man has to make the right play, and no matter how big the name on the back of the jersey is, every man gets criticized or berated by Coach Pop all the same. Spo knows this, and it’s precisely why he isn’t jumping for joy just because they managed to steal a game on the road. While the Spurs have an offense that lives and dies by teamwork, it’s very possible the Heat have an offense that lives and dies by one man.

The onus is still on LeBron James to come out and play yet another big game. After a drama filled Game 1 that every talking head in sports media clamored about, LeBron made the haters awfully quiet after a brilliant 35-point double-double game in Game 2. His jumpshot looked as great as it’s ever been in the posteason, and his world-class teammates were just as great. Chris Bosh and Dwyane Wade combined for 32 points, and both players hit massive, game-defining shots in the waning moments of Game 2. The Big Three showed out in a big way, but Game 3 has to be a better effort for the team as a whole.

Although it’s possible the Spurs might choke another game away, there’s no reason Miami should even put themselves in a situation like that in the first place. We can break down the x’s and o’s; we can talk about who needs to do what individually, but for Miami to win this next game, it’s as simple as playing with their backs against the wall.

Complacency is the biggest threat to consistent effort, and the Heat recognize that — especially Chris Bosh, “The challenge is to stay steady,” he said to media personnel at Monday’s shootaround, “You have to put [the joy of winning] behind you.”

It seems obvious, but such a simple mindset is often overlooked. These teams have watched film of one another for hours, perhaps days, and they’ve both done it over and over countless times.

At this time of year, there are no surprises; there is only 48 minutes where tactics are tested, and willpower runs the gauntlet of elite level competition. If Miami as a collective unit continues to do what’s gotten them this far, there’s no stopping them, but like Bosh understands, the only easy day was yesterday.

Clichéd rhetoric aside, Miami needs to spread the floor and force San Antonio’s bigs to pop out. LeBron needs to have another big scoring effort—off the dribble especially, and Wade and Bosh need to help him out when he goes to the bench. Rashard Lewis hit a trifecta of big triples in Game 3, and if they can continue to capitalize off of a rejuvenated Lewis, it makes it tougher for San Antonio to stop Miami’s superstars.

It’s too early to talk about a three-peat, but Miami is lying if it hasn’t crossed their minds. Their dream can become a reality, but it all starts with a big win at home, and there’s no doubt that they’re hoping a big win comes Tuesday night on their home floor.