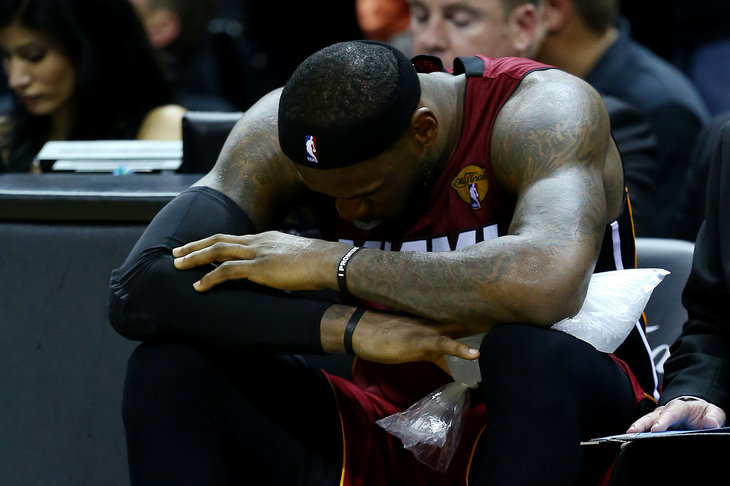 (San Antonio, TX) – As a potential classic NBA Finals series rematch was on, the air conditioning at the AT&T Center wasn’t, as the San Antonio Spurs were seemingly too hot down the stretch for a cramping LeBron James and the Miami Heat in Game One. As James watched helplessly from the sideline for the final four minutes, the Spurs used a 16-3 run to put a humid, tight game out of reach as the Heat fell 110-95 Thursday night.

The Heat and Spurs played each other very closely for the first three quarters, with no team leading in double figures entering the fourth quarter. However, as the air conditioning at the AT&T Center malfunctioned during the second quarter and stayed off for the rest of the game, the speed and aggression of James began to diminish down the stretch. James, despite a solid 25-point, 9-for-17 performance along with five rebounds, began to suffer cramps throughout the second half, missing 6:57 of the remaining 7:31 of the game as the Spurs began to figuratively heat up from beyond the arc.

Danny Green, held scoreless in the first three quarters, scored 11 points in the fourth (13 for the game), shooting 3-for-3 from three as part of a 6-of-6 Spurs onslaught from long distance. Despite 23 turnovers (nine in the third quarter), the Spurs remained hot from the field and literally hot on the court, as the temperature in the arena went over 90 degrees. As the Heat went cold late in the fourth, the Spurs managed to shoot 14-of-16 from the field in the final 12 minutes, as Miami was stymied by a 31-9 run after holding a seven-point lead with 9:37 remaining.

“They (Spurs) flattened us out offensively (when James left with 3:59 remaining),” Heat Head Coach Erik Spoelstra said. “The floodgates came open at that point.”

Trailing 94-90, James drove for a layup at the four-minute mark to slice the Spurs’ lead in half, but couldn’t go any further, standing pat under the Spurs’ basket after the play, as the cramps resurfaced. James was carried off the court immediately to help avoid having the Heat burn a timeout with only one remaining. As James walked back to the locker room, Miami would go 1-for-3 with three turnovers in James’ absence to drop a second straight Game One during this year’s playoffs.

“I felt like it was a punch to the gut when you have your leader (James) limping to the bench,” Spoelstra said.

James yelled during a timeout that “they’re trying to smoke us out,” referring to the rising temperature from the lack of air conditioning in the arena. James still managed to pound the Spurs inside with constant penetration to the basket, leaving main Spurs defender Kawhi Leonard with foul trouble throughout the first half. As fatigue and cramps began to overwhelm the two-time Finals MVP, James’ frustration began to surface as well, finishing with only one basket during a nightmarish fourth quarter.

“It sucks at this point in time in the season,” James said. “It was frustrating sitting out and not be able to help our team.”

James said he’s “feeling better than I did when I came off the floor” after receiving an IV for his cramps, but was unable to appear for his usual post-game press conference with Dwyane Wade. With 33 minutes of game time under his belt following Game One, the Heat must surely monitor just how long he plans to go for Game Two. Wade, who finished with 19 points on 8-of-18 shooting, saw his partner in crime’s absence as a big concern.

“When LeBron went out, it was not ideal,” Wade said as he sat alone at the podium during the post-game press conference. “We didn’t get good looks, and you can’t do that against a good team.”

NBA president of basketball operations Rod Thorn said the league never considered stopping the game due to the electrical failure of the arena’s air conditioning system. Players from both teams surely felt the humidity, but they denied it having any stirring effect on the outcome of the contest.

“I think everybody has done it before,” Wade said, when referring to playing in those types of conditions. “I think it’ll be a lot better on Sunday.”

Wade, despite an efficient first half with 12 points, finished with only seven points after halftime. As the Heat bench struggled mightily to keep pace with the Spurs’ reserves, Ray Allen put forth a huge outing with 16 points off the bench, shooting 6-of-12 from the field and notching five steals. The Heat had frisky hands all night with 14 steals, finishing with 28 points off turnovers. However, 27 Spurs points off 18 Heat turnovers were far more demoralizing for the two-time defending champions. Although James was heard saying “They’re trying to smoke us out of here” during a timeout, Wade placed the Heat’s inability to finish on the shoulders of his own teammates during a 36-17 fourth quarter deficit.

“We had opportunities; they cut it real fast,” Wade said. “You don’t want to make mistakes, whether it’s fatigue. They buried us with those open looks. They played a better last five minutes to win the ballgame.”

James tried to re-enter the game during the final four minutes, but Spoelstra refused to allow him. Chris Bosh, who scored 18 points off a 7-of-11 clip, said he has never seen James in that condition, but noted that the lack of air conditioning wasn’t an issue for the 6’11” Dallas native.

Much like its previous series with the Spurs, the Heat finds itself looking for answers to avoid a 2-0 deficit, something that has never happened during the James/Wade/Bosh era. In addition to a need for both teams to reduce turnovers, Spurs Head Coach Gregg Popovich offered another point of focus for Game Two.

“Hopefully, we can pay our bills,” Popovich said in reference to the shortcomings of the AT&T Center’s air conditioning.