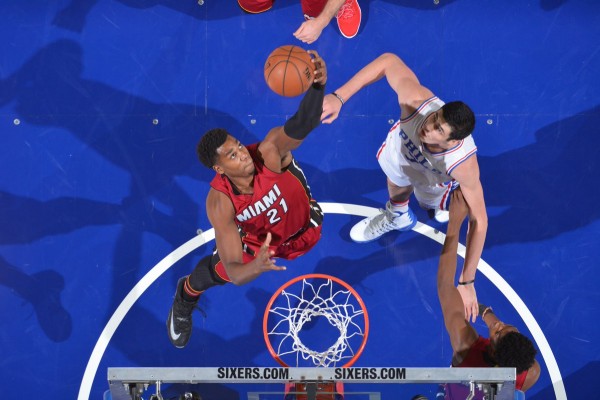 (Philadelphia, PA) — A career night for the Miami Heat’s (4-9) center Hassan Whiteside could not keep the team from losing 101-94 against the Philadelphia 76ers (4-10) on Monday night. Whiteside finished with a career-high 32 points and added 13 rebounds and two blocks in a losing effort that ended the team’s two-game winning streak.

“He’s getting better,” Heat head coach Erik Spoelstra said after the game. “He’s getting competitive more and more each game. He’s really trying to take on that responsibility and help this team win, and he’ll continue to get better. We don’t know what his ceiling will be this year. But in the meantime, we have to continue to try to build some habits. This was not one of our better defensive games, and we paid the price.”

Whiteside made a quick impact with 13 points and five rebounds in the first quarter and was asked if the NBA has become “a big boy” game after speculation that “people have talked for a while that it’s not a center’s league.”

“I don’t know who ‘they’ are. ‘They’ don’t watch basketball,” Whiteside said. “I don’t have a day off at the center position. Every night, from Dwight (Howard), to (Andre) Drummond, to (DeMarcus) Cousins, I have a really good center [to play against].”

The Heat’s 30 points in the first quarter made it seem like the team’s offense had picked up where it left off when the team had scored 114 points against the Washington Wizards on Saturday night.

However, early foul trouble limited Whiteside to 11 minutes in the first half, and the Heat’s offense scored just 15 points in the second quarter.

A Robert Covington layup with five seconds remaining in the half gave the 76ers a 46-45 lead.

For the 76ers, center Joel Embiid led the team with 22 points, Gerald Henderson tagged 19, and Jahlil Okafor had 15.

Whiteside and Waiters carried the Heat’s offense in the third quarter — accounting for 22 of the team’s 29 points. With less than three minutes left in the third, Whiteside powered his way to make a layup and score his 28th point of the game, which tied his career-high. He became the 20th player in franchise history to have a 30-point game complemented by double-digit rebounds.

“We had some opportunities offensively,” Spoelstra said. “Obviously, we came up short on a lot of those offensive possessions. They made some plays at the end. It was a back-and-forth game. Looked like it was going to be a possession game going down the stretch, and they turned it into something that wasn’t.”

Nearly making Heat history on the opposite end was Josh Richardson, who shot 1-of-11 from the field while Tyler Johnson went 1-of-7.

Defensively, the Heat could not keep the 76ers from draining 3-point field goals on the night as the team shot 11-of-26 from behind the arc for the game. Entering the fourth quarter, the Heat trailed 78-74.

The 76ers’ balanced offensive onslaught led to 23 points in the final quarter and pressured Whiteside to commit his fifth foul with the score tied at 91.

Philadelphia finished the last three minutes on a 10-3 run, and the Heat offense mirrored the stagnant second-quarter performance with another 15 points in the fourth to cap off a 39 percent shooting night.

“We were too soft,” Waiters said. “We got beat backdoor a lot, and they wanted it more.”

Coming up next on the schedule for the Heat is a road game vs. the Detroit Pistons (6-8) on Wednesday night shortly after 7:30 p.m. ET, and will broadcast live on Fox Sports Sun.
[xyz-ihs snippet=”Responsive-ImagenText”]