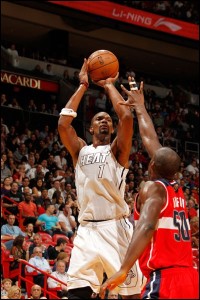 Getty Images: "For the Heat, Chris Bosh will need to step up as the dominant post player against Minnesota’s formidable frontcourt."

The Miami Heat will have their hands full Tuesday against the Minnesota Timberwolves and their larger than life frontcourt in South Beach.

Minnesota (12-10) has started out slow with both Kevin Love and Ricky Rubio missing significant time due to injuries, but with Love back in the starting lineup, the Timberwolves are showing signs of life.

Love has been a cornerstone in the post for the Timberwolves, and his ability to rebound as well as shoot consistently from deep proves to be a mismatch for many teams.

He is averaging 19.4 points and 13.7 rebounds per game since his return back on November 21 against the Denver Nuggets where he scored 34 points and had 14 rebounds in his season debut.

It will be no different for Miami, with their smaller, quicker lineup, as the combination of Love and Nikola Pekovic will be a daunting task.

Pekovic, the Montenegrin center is having a career year, averaging 15.3 points and 7.3 rebounds per game.

Over the past four games, Pekovic has caught fire, averaging 23.2 points per game, finding his niche in the post opposite Love.

Ricky Rubio, who missed the first 20 games after having ACL and MCL surgery, played against the Dallas Mavericks and Orlando Magic but will miss the game in Miami.

“I want to play, but I’m not cleared to play in back-to-back games,” Rubio said.  “I wish I could play in all the games more than 20 minutes, but I have to make sure my knee is OK before I start playing all those minutes.”

Minnesota is coming off of a disappointing 102-93 loss to the Orlando Magic on Monday, where Love led the way for the Timberwolves with 23 points and 15 rebounds in the losing effort.

Rubio was held scoreless with just four assists in 16 minutes of action.

“He’s unique, he is an anomaly at that position,” Heat Coach Erik Spoelstra said about Love’s talent.  “There is no way to define how he does it, he is just able to find a way and it’s remarkable.”

Minnesota is a gritty defensive team, ranked 4th in the NBA allowing only 93.7 points per game in contrast to Miami’s 18th ranked defense that allows 98.1 points per game.

Acquired in the off-season via free agency after playing for the Utah Jazz, small forward Andrei Kirilenko is another scorer that the Heat defense needs to be concerned with.

Kirilenko is averaging 13.5 points and 7.8 rebounds per game but on the contrary is shooting just 28.1 percent from three-point range this year.

Kirilenko will be matched up against LeBron James for most of the game, and expect James’ defensive perilous to contain the 10th year man out of Russia

Miami (15-6) recently blew out the Washington Wizards 102-72 on Saturday night, led by James’ 23 points and 10 rebounds, but will need help from their other stars to defeat the Timberwolves.

For the Heat, Chris Bosh will need to step up as the dominant post player against Minnesota’s formidable frontcourt.

Bosh is averaging 18.1 points and 8.1 rebounds per game for Miami, but has only averaged 14.4 points in the past five games that the Heat has lost two of.

“We are at the point where we have to start getting some carry over from other games and just be consistent on defense,” Bosh said.

For Miami’s third piece of the “big three” Dwyane Wade will need to rebound after scoring a combined 25 points over the past two games.

In the previous two matchups against the Atlanta Hawks and New Orleans Hornets, Wade put up 26 points in each game and shot a remarkable 79.8 percent from the field.

Although seeing that efficiency of shooting is improbable to repeat, the need for Wade to contribute as the second leading scorer behind James is crucial to Miami’s ability to outscore Minnesota.

With the emergence of Joel Anthony into the rotation, the Miami defense will be more solidified in containing the combination of Love and Pekovic.

Anthony might see more minutes in this game than in any other thus far simply for his ability to protect the rim.

Seeing more playing time as well, veteran forward Udonis Haslem started against the Wizards, finishing with 13 points and seven rebounds in 24 minutes.  That sort of production will be required out of Haslem to combat the style of play that Minnesota runs.

It will require grit, efficiency, and all-around team play for the Heat to fend off the Timberwolves, but a victory is manageable and crucial in Miami’s pursuit of the New York Knicks for the top spot in the Eastern Conference.

“Knock on wood, hopefully we can keep it going,” Spoelstra said. “It does feel good to have everyone out there practicing.”