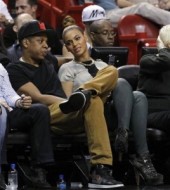 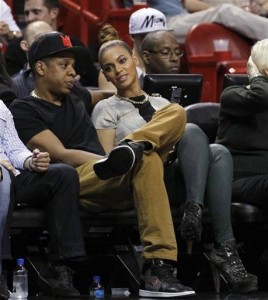 AP, "There were multiple stars at the American Airlines Arena on this particular night including hip-hop conglomerate Jay-Z, his wife Beyoncé Knowles, rap superstar Lil Wayne, and boxing phenom Floyd Mayweather, yet LeBron Raymone James shined the brightest on Monday."

There were multiple stars at the American Airlines Arena on this particular night including hip-hop conglomerate Jay-Z, his wife Beyoncé Knowles, rap superstar Lil Wayne, and boxing phenom Floyd Mayweather, yet LeBron Raymone James shined the brightest on Monday. Capped off with a sky-scraping alley-oop feed from teammate Norris Cole, James finished the night with another stellar all-around performance with 27 points, seven rebounds, and six assists while shooting 10-16 from the field.  As a matter of fact, Cole threw the lob so high this time that James said, “Cole made me go get it, for sure.

“He actually took that literally when I told him, `Just throw it anywhere.”

Dwyane Wade simply referred to LeBron’s leaping ability as it just being “his bionic leg.”

This is now the 24th straight time that James has scored atleast 20 points and it doesn’t seem like he is stopping anytime soon.  LeBron displayed the entire repertoire on a night where the country’s biggest stars were watching.  As the first quarter was winding down, with 4.6 seconds left on the game clock, James drove down the length of the floor past four Atlanta defenders and finished easily as he bulldozed his way to the basket.  Similary at the end second quarter, LBJ finished with an and-one as he made a reverse layup on Al Horford.

Nothing short of spectaculur himself, two-time NBA champion, Dwyane Wade filled up the stat sheet quite nicely as he finished with 26 points for the second game in a row, shooting a stellar 11-13 from the field.  As the naysayers and badmouthers keep pecking away at Wade’s ego, Wade is simply letting his game do the talking.  Wade is now shooting an eye-popping 80% from the field for the last two games and when asked about the recent critisicm of his play, Wade said, “I really didn’t listen to the noise.  I didn’t pay attention … I never really concerned myself with the noise outside.”

As for James, he could’t help but lash out at some of the naysayers, especially Charles Barkley.  “Charles Barkley needs to shut up,” James said.  “I mean, [Wade’s] shooting 80 percent from the floor in the last couple games.  Come on, man.  That’s like crazy, right?”

A big surprise as of late has been Miami’s reserve point guard, Norris Cole.  Cole finished the night with 10 points and four assists off the bench and didn’t miss a shot.  Not only that, but Cole’s tenacity on the defensive end of the floor has been exactly what the Heat need on the perimeter.  As a result Cole’s minutes have been increasing.

Moreover, Atlanta has now lost seven of it’s last eight meetings with Miami and attributed the Heat’s success to two players, James and Wade.  Josh Smith, who was one of the few bright spots for Atlanta finished the night with 22 points including 4-5 from the three point line.  Smith said, “We gave LeBron and D-Wade some opportunities to be able to get some layups early on and whenever you play against a team like that or whenever you give a great player opportunities to get layups first, the rim gets that much bigger and they started hitting all kinds of shots.”

Another bright spot for Atlanta was center Al Horford, who finished the night with a double double, 20 points and 11 rebounds, and simply put, dominated Chris Bosh on the interior.  Color commentator Dominique Wilkins even said at one point, “Bosh is not accepting the physical challenge of Al Horford.”  Now although Miami walked away with the victory, Miami’s lack of interior defense and at times perimeter are mildly concerning.  Hopefully Erik Spoelstra is using this first half of the season an experimental phase to evaluate what kind of defense fits the team’s identity best.