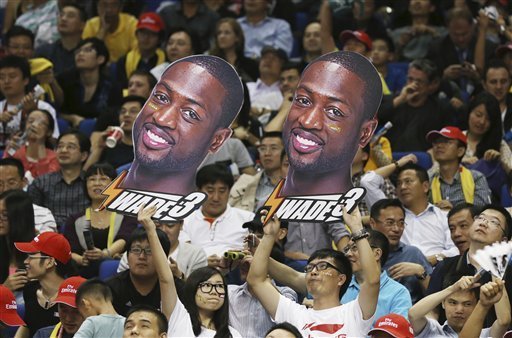 In Chris Paul’s return to action since breaking his right thumb in the 2012 London Summer Olympics, The Los Angeles Clippers defeated the Miami Heat 99-89 in front of a sold-out Shanghai crowd in their second pre-season match up.

This was the first game held in the state-of-the-art Mercedes-Benz Arena located in downtown Shanghai, as the NBA continued their China Games tradition, bringing more international exposure to the league.  With Yao Ming sitting courtside, fellow center DeAndre Jordan put on a first quarter show getting deep low post position and scored 13 points, shooting a perfect 6-of-6 from the field.

“DeAndre did a good job of getting post position early and attacked quickly before the double team could come,“ Clippers coach Vinny Del Negro said.

Relying on a smaller starting lineup and Chris Bosh at the center position, post defense will be a concern for the Heat going forward in the 2012-2013 season as teams will look to expose their starting five’s lack of girth.

Lebron James did not score for the first eight minutes of the game, but did so emphatically on an alley-oop pass from Dwyane Wade where James was called for a technical foul for hanging on the rim.  Wade, who received the loudest roar from the Chinese crowd during player introductions, played just eight minutes but scored seven points for the Heat, showing his knee is recovering just fine from surgery with two dunks on the night.  The Clippers ended the first quarter strong shooting a remarkable 67-percent from the field and led 32-22.“They outplayed us all the way until the end,” Spoelstra said.

Chris Paul stepped onto the court for the first time since breaking his thumb in the London Olympics over the summer and regained his role as the general of the Clipper offense.  Paul finished with four points, six assists and five rebounds, finding his open teammates through the holes in Miami’s defense.

“Physically I felt a lot better than I thought I would, but I still have to get better mentally,” Paul said.

The second team unit started the second quarter with Ray Allen running the offense and featured Rodney Carney, who played in the China professional league in 2011, connecting on three shots from beyond the arc and led the Heat with 15 points.  Carney‘s ability to be a reliable outside threat and attack the heart of the defense with the dribble drive is a surprise and could earn him a roster spot.  The former New York Knick center Josh Harrellson is another player competing for a roster spot.  Harrellson added nine points, six rebounds and a pair of blocks and is making a case to be a feature off the bench in Miami’s low post.

“Carney played well,” Spoelstra said.  “I like his energy and athleticism; he has been a pleasant surprise for our team.”

Following a tour and climb of the Great Wall of China on Thursday, the Heat defense seemed a step slower on defensive rotations and was unable to provide help defense.  The Clippers shot 59-percent from the field in the first half and led 57-43 at halftime.

In addition Bosh found his groove also contributing 11 points as well as five rebounds but was man-handled by the Clippers’ post players.  The duo of DeAndre Jordan and Blake Griffin combined for 31 points and 19 rebounds leading the Clippers attack.  Jordan, who finished with 18 points, made all eight of his shots and is shooting 82-percent from the field in the preseason.  The Heat trailed the entire game only holding a 9-4 lead at the nine minute mark of the first quarter as they were out rebounded 49-36.

“The crowd was excellent tonight,” Del Negro said.  “Our players fed off of that and played with more energy and enthusiasm.”

Ray Allen struggled from beyond the arc, missing all five of his three point shot attempts but still contributed six points by cutting to the lane for easy baskets.

“Ray is a seasoned veteran who has a skill set we clearly like,” Spoelstra said.

On the contrary, Clippers forward Caron Butler did not struggle one bit, connecting on three of his four three point shots and finished with 11 points in 15 minutes of limited playing time.

Late in the fourth quarter, Miami’s bench, led by five straight points from Terrel Harris, went on an 8-0 run cutting the Clippers lead to 93-87 but came up short as the clock ran out on the Heat’s comeback.  This is no time to panic for the Heat, as Coach Spoelstra experimented with multiple lineups and gave a large majority of the minutes to the five players competing for two roster spots.

“We have a lot of compelling battles for our final two roster spots,” He said.  “This is a time to get those players more minutes.”