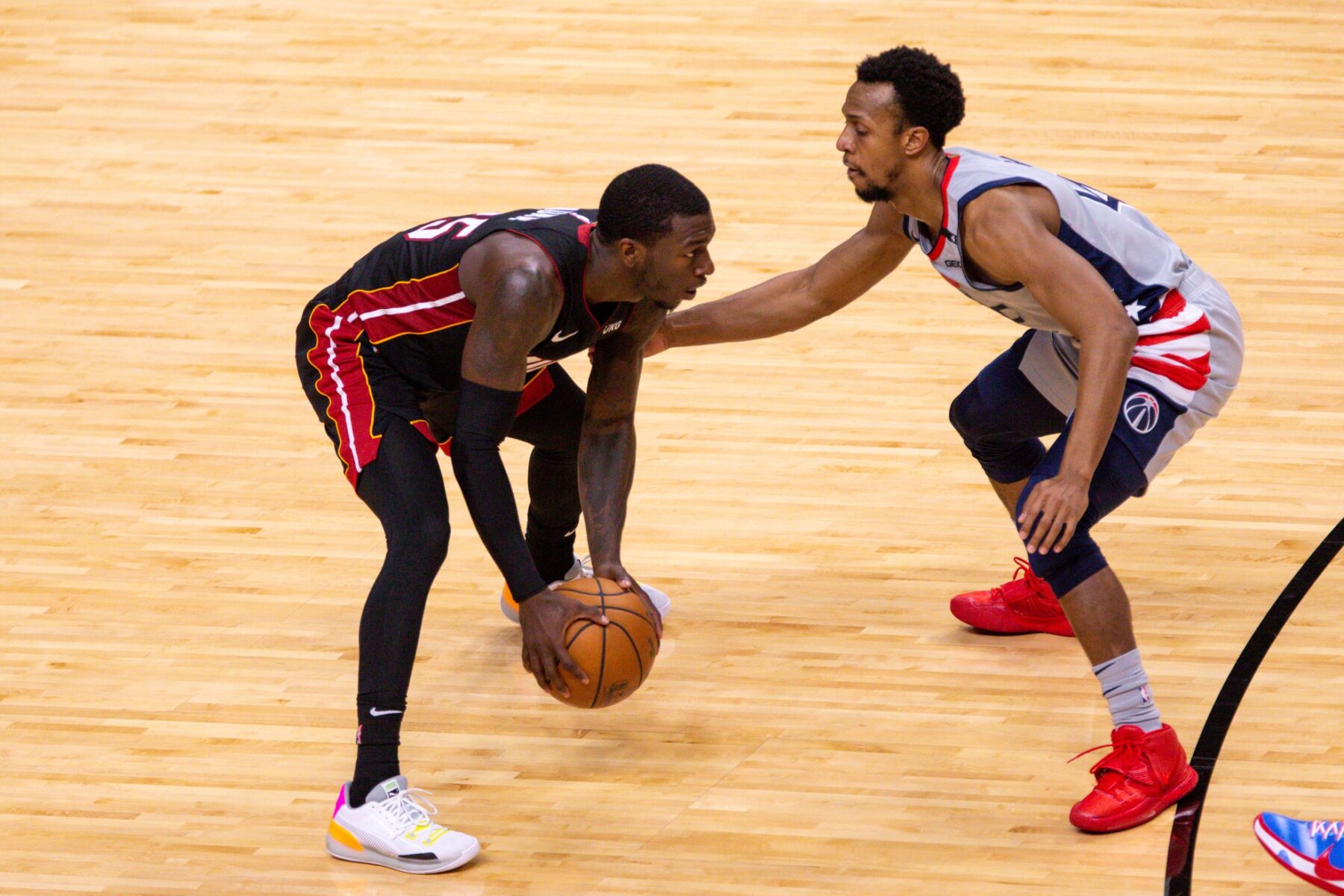 After a rookie season in which he averaged 15.3 points, 2.7 rebounds and 3.3 assists per game while shooting 35.0 percent from three, Kendrick Nunn has been in and out of the Miami Heat’s rotation this season.

Recent injuries to Avery Bradley, who is out for three to four weeks, and Goran Dragic, who missed Sunday’s matchup against the New York Knicks due to a sprained left ankle, have opened up a chance for Nunn to put himself back into the Heat’s rotation for good.

Nunn was inserted into the starting lineup against the Knicks on Sunday, and he repaid Heat head coach Erik Spoelstra’s trust, recording 16 points, four rebounds and three assists while hitting 4-of-7 from three.

With his solid play of late, the second-year pro has shown his resiliency and proved that he deserves a permanent spot in the Heat’s rotation moving forward.

Here’s a deeper look into what Nunn offers the Heat as well as what he needs to work on in order to continue improving and helping the team out.

What Does He Bring to the Heat?

The Heat are currently averaging 107.3 points per game, which is 27th in the NBA. Many times this season, the Heat have struggled to get their offense in sync, leaving the team scrambling.

Nunn is a player that is able to create his own looks and take his defenders off the dribble, which is something that the Heat can definitely use.

The Oakland University product is a career 34.8 percent shooter from three and has shown an ability to really get it going from beyond the arc.

When he is making his shots from three and is able to space the floor, giving Jimmy Butler and Bam Adebayo room to attack the basket, Nunn is one of the team’s most dynamic players.

Where Can He Improve?

Nunn has shown that he has some room to grow in catch-and-shoot situations (34.8 percent shooting this season). However, in Sunday’s win against the Knicks, he showed that he is more than capable of hitting those shots.

If he is able to make more of these shots, it will add another useful layer to the Heat’s offense and open up more looks for everyone on the floor.

Although Nunn is a fairly aggressive player on offense, he doesn’t take that many free throws per game (1.1 this season) or draw many shooting fouls (only seven drawn on the season).

Given that he shoots 84.6 percent from the line for his career, the Heat would benefit from him looking for more contact at the rim and drawing more fouls.

Other areas of improvement for Nunn are his assists and his turnovers. So far this season, he is averaging 2.4 assists and 1.9 turnovers per game with a 1.24 assist-to-turnover ratio.

In this play from Sunday’s game, Nunn showed an ability to effectively run the pick-and-roll with Adebayo, showing off a nice pocket pass in the process.

With Nunn’s offensive aggressiveness and Adebayo’s excellence in pick-and-rolls, it would be a good idea to run those plays with the two more often to see if it expands Miami’s offense a bit more.

The Heat not only average the most turnovers in the NBA at 16.8 per game, but they also give up the most points off turnovers in the league at 20.9 per game. As the team’s starting point guard, Nunn has a big role in the offense, which makes taking care of the ball and cutting down on turnovers extremely important.

Staying Ready and Seizing His Opportunity

Although Nunn has received a total of six “did not play – coach’s decisions” this season, he is still confident in his abilities and has mentioned that he is always ready whenever his name is called upon.

“It’s tough, but we’re professionals so it’s our job to do that. I’m built to do that,” said Nunn. “Whether it’s starting, coming off the bench, DNP’s or whatever. Whatever minutes I get, I’ll always be ready for it.

“I think I’ve given them some trust to be able to trust me, to call on me whenever. I’ll produce. I believe the coaches trust me.”

So far this season, Nunn is averaging 13.2 points, 3.4 rebounds and 2.4 assists per game while shooting 48.5 percent from the field and 33.8 percent from three.

He will have a chance to put in another good performance on Tuesday as the Heat take on the Knicks, with this game taking place in Miami. Tipoff is scheduled for 7:30 p.m. EST.