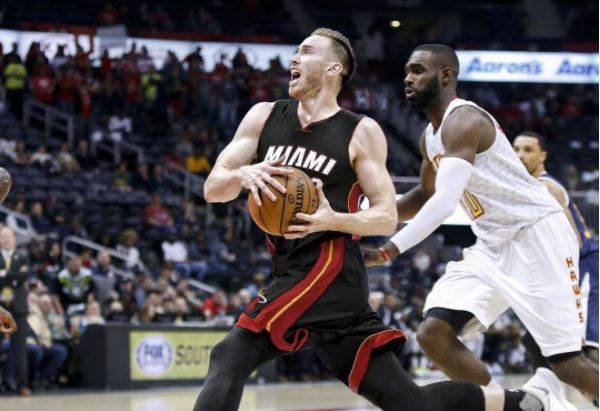 Miami Heat team president Pat Riley might have a couple more offseason tricks up his sleeve, and we know he’s gotten it done before.

With reports that Utah Jazz forward Gordon Hayward will grant the Heat a sit-down on the July 1 start of free agency, it’s high time we look deeper into how Hayward’s game would add to the Heat roster.

The Butler University product’s standard per game line — 21.9 points, 5.4 rebounds, 3.5 assists — suggest he’ll help any team. Just reaching his peak at 27, the Heat potentially get a skilled player that will be worth the full $131.6 million over four years – the maximum contract Hayward can be offered as a free agent (the Boston Celtics have also been widely reported as a possible destination for Hayward).

His signing would immediately alter the look and feel of the Heat, who’re now permanently separated from power forward Chris Bosh. Bosh reached a deal to part ways with the organization after his issues with blood-clotting were declared career-ending (the move granted the Heat additional cap relief which enables them to have a chance at Hayward). Even with the salary cap projected to rise to around $99 million, Hayward’s prospective signing would likely prevent the re-signing of guard Dion Waiters and forward James Johnson — two players the Heat likely would be thrilled to live without, should they sign Hayward.

Projecting the lineup with Hayward only, and not including any other additions such as Indiana Pacers two-way star Paul George or free agent Blake Griffin, the Heat’s starters look like this: guard Goran Dragic, Hayward, small forward Justise Winslow, forward Josh McRoberts, and center Hassan Whiteside. New draftee and still-raw big man Bam Adebayo will also get plenty of playing time up front.

The first thing Hayward provides is actually an intangible: his intelligence. One of the smartest players in the league, he understands what defenses are attempting to do to him and his teammates. At six-foot-eight and 230 pounds, he’s a run-and-jump athlete that can also hold his ground, similarly to Jazz teammate Joe Johnson.

His dynamic plays out of pick-and-roll sets illuminate his passing skills, which would enable the crafty Dragic to play off the ball on occasion, saving his 31-year-old legs. Players like Winslow, Adebayo, and particularly Whiteside, will be on the receiving end of great passes for easy buckets. Hayward is always playing downhill, putting pressure on an opposing team’s defensive integrity.

He’s excellent off the dribble and highly efficient as a shooter/scorer hybrid (47.1% FG / 39.8% 3FG / 84.4% FT shooting split last season), who can get the shot he wants, and then finds even better options. This is key for the Heat because Hayward’s skill package and size allow him to make the best play available, even if it’s not a shot attempt for himself.

This is the moment I fell in love with @gordonhayward #HayDay https://t.co/TOtgebT927

For all the offensive upgrades he provides, he’ll help the Heat most on defense. In fact, there’s a chance the Heat will improve from what was already a top-five defense, into the top spot with a bullet. Hayward’s long and active, he closes out well on the perimeter and patrols the lanes for steals and deflections. Working alongside the aggressive Winslow, this tandem will put tremendous pressure on wings, long before they can reach the Whiteside and Adebayo block party.

Head coach Erik Spoelstra‘s job will be made easier, with Hayward fusing together Miami’s loose ends, creating more cohesion and better floor organization offensively. Waiters played well for the Heat, but living in perpetual heat check mode isn’t winning basketball, and he left a lot to be desired defensively.

Though Miami is also in pursuit of George or Blake Griffin, Hayward’s addition alone makes the Heat a sure playoff team that could flirt with 50 wins this upcoming season.
[xyz-ihs snippet=”Responsive-ImagenText”]