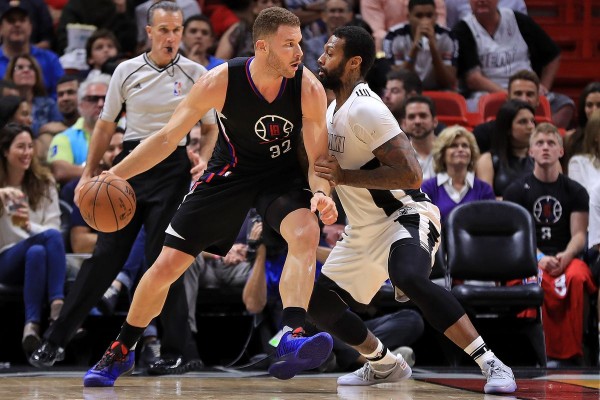 With NBA free agency set to get underway on Saturday, the Miami Heat may be looking to come away with a major signing during the process. One close observer indicates that the Heat could be in strong contention to sign Los Angeles Clippers power forward Blake Griffin.

Lee Jenkins, an NBA writer for Sports Illustrated, appeared on Tuesday’s edition of “The Herd” with Colin Cowherd, and indicated (at about the 2:30 mark of the video) that he expects the 6-foot-10 Griffin to sign with Miami.

“This is a guess, but I’m going to guess Miami on him. I think he’s somebody, too, who’s played, he’s now played in a Big 3, he’s played with three guys,” Jenkins said. “I think, he’s a guy you can see want to flourish a little bit and sort of have his own team and if he goes to the Heat, he would have that. Plus the culture that they have there and some of the other pieces. If I’m, I’m taking kind of a flyer on Blake Griffin to Miami.”

Griffin turned down his $20.1 million option to play for the Clippers for the 2017-18 season, though he could re-sign with them on a five-year deal worth an estimated $175 million. That’s in contrast to the maximum that the Heat (or any other team) could offer: four years for roughly $127 million.

This past season, Griffin averaged 21.6 points, 8.1 rebounds and 4.9 assists, while shooting 49.3 percent from the field. Tom D’Angelo of the Palm Beach Post noted that Griffin also limited players he guarded to 43.6 percent shooting – 2.9 percent under their normal percentage.

D’Angelo also indicated the main concern with offering Griffin, a five-time All-Star, such a large contract:

“The biggest gamble is Griffin’s health. He has missed 80 games in the last three regular seasons combined and the last two years his postseason was cut short, including playing in just three games in the 2017 playoffs because of a toe injury. In 2016 Griffin partially tore his left quadriceps tendon in Game 4 of the Clippers first-round series and did not return.”

One former teammate of Griffin’s, Jared Dudley of the Phoenix Suns, believes that the final decision will come down to a choice between staying with the Clippers or playing with the Heat.

Both Griffin and teammate Chris Paul will be free agents this summer, which means that Clippers owner Steve Ballmer will be forced to dig deep to keep both players. However, the fact that he paid $2 billion to purchase the team shows that he’s not afraid of steep costs, which could undercut the Heat’s chances.
[xyz-ihs snippet=”Responsive-ImagenText”]