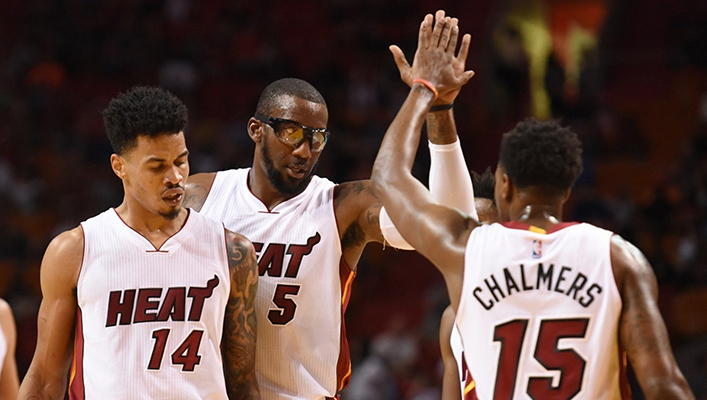 There’s been a whole lot of hype in the NBA universe regarding the potential of the Miami Heat in 2015-16. Coming off a year in which the team underproduced and missed the playoffs for the first time since 2008, expectations are considerably higher for this year’s revamped squad. So realistically, how good can this team be?

Here’s what experts and analysts around the league are saying:

Last month, Jared Doyle of Rant Sports published his 5 Way-Too-Early Predictions for the Miami Heat and the bullet points are as follows:

5. Dwyane Wade Will Be One Of NBA’s Most Efficient Guards

3. Second-Best Record In The East

Each of these predictions are well within the realm of possibility…

Looking at it now, only 2 teams from the East could win the NBA Championship, Cleveland and Miami.

Some are lumping the Chicago Bulls in the ECF race as well, but they may wind up having more trouble than success. With Derrick Rose’s health being a constant concern, Pau Gasol getting up there in age and Joakim Noah coming off his worst statistical season in years, it may be hard for them to live up to expectations. Time will tell, but currently the Heat have a strong chance to face you-know-who and the Cleveland Cavaliers in the Eastern Conference Finals come May.

On paper, the Heat have one of the most impressive rosters in the league, but there’s a reason they play the games.

Zach Buckley of Bleacher Report has Miami as the biggest wild card of the 2015-16 season due in large part to an impressive roster, but also factoring in that this starting five has never played together and the bench is full of fresh faces that will likely endure a considerable adjustment period. He does, however, go on to mention the fact that four of the Heat’s five starters possess a PER of at least 17.4, which ranks them in the top 70 amongst players who play at least 20 minutes per game. Luol Deng is the odd man out with a PER of 15.5, but that’s still an above average mark. Deng also recently promised to be more consistent this season, which may or may not count for something.

It’s not all about the starting five, though. This is one of the deepest Miami teams in recent years. The Heat have guys like Gerald Green, Josh McRoberts, Mario Chalmers and Amar’e Stoudemire coming off the bench; all of whom would have a legitimate shot at starting on other squads.

Those within the league like what they’re seeing from the Heat, too.

A recent poll taken by NBA GMs have the Heat finishing fourth in the Eastern Conference. They lauded the Heat’s stellar offseason, having voted Justise Winslow as “the biggest steal of the draft,” and Amar’e Stoudemire received a vote for the “most underrated free agent acquisition.”

For what it’s worth, even LeBron James considers Miami to be a legitimate threat.

“I think Miami is doing some great things,” he said in a recent radio interview with Bleacher Report. “They drafted the kid out of Duke, Justise (Winslow). I think he’s gonna be a really good player. They added some big pieces. The re-signing of Dragic and C.B. coming back and getting D. Wade back. They’re going to be a contender.”

Miami’s first game of the season tips off October 28th, versus the Charlotte Hornets. Questions will begin to be answered by then. Look for the Heat to come out of the gates swinging as they are dead set on making a statement this year.
[xyz-ihs snippet=”Responsive-Ad”]