Don't Miss
Home / Editorials / The Last Remnant of the Big Three Is Gone, But The Future Is Still Bright in Miami

The Last Remnant of the Big Three Is Gone, But The Future Is Still Bright in Miami 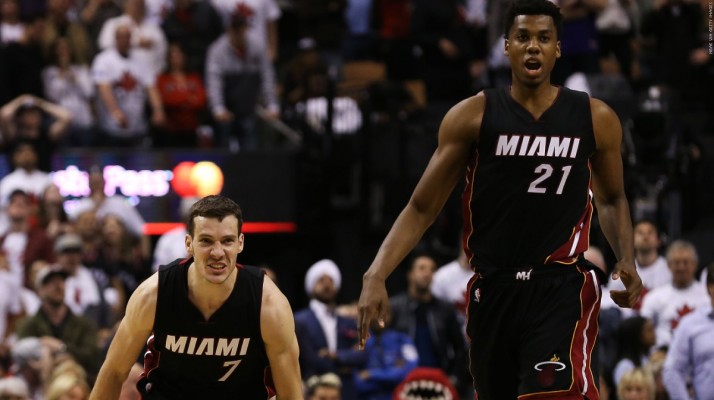 It’s been a somber summer for the Miami Heat. When free agency began back in July, there was an initial air of hopefulness in Miami. The team made quick work of the Hassan Whiteside situation by almost immediately signing him to a long-term deal, but soon thereafter, things took a turn for the worse.

First, the Heat failed to sign the highly sought-after Kevin Durant. Then, South Florida’s greatest champion, Dwyane Wade, left to sign with the Chicago Bulls. More recently, the Heat announced that Chris Bosh, the final remaining member of the “Big Three,” will probably never play another game in a Heat uniform.

For Heat fans, losing out on Bosh and Wade certainly hurts, but the fact is, the show must go on. Miami will now have to find a way to move on from a heartbreaking offseason and focus on the team’s potential for success in the future.

So, what’s next for the Heat?

1. The Evolution of Justise Winslow

The Heat’s 2015 first-round draft pick has already proven to the world that he is ready to succeed in the NBA. Justise Winslow made a name for himself on the defensive side of the ball last season while earning valuable time guarding some of the league’s best players. He eventually even earned a starting role in the playoffs.

The next step in the evolution of the former Duke University product will be for him to develop and hone his offensive game. In 2015-16, Winslow averaged a mere 6.4 points per game. Granted, Winslow was rarely used as an offensive weapon, so he didn’t take many shots. Regardless, he must continue to develop his jump shot.

In an increased role on offense during this year’s summer league play, Winslow brought his scoring average up to 16.3 points per game. With the loss of primary scorers Bosh and Wade, expect Winslow to be counted on more heavily to produce points. Once he hones his offensive game, the next step for the six-foot-seven forward will be to take on more of a leadership role. Miami is a very young team and Winslow sounds like he’s ready to take the reigns.

Justise Winslow told me today that he thinks the Heat can be his team soon. Will play the full interview today on @790TheTicket

Next: Power Forward by Committee