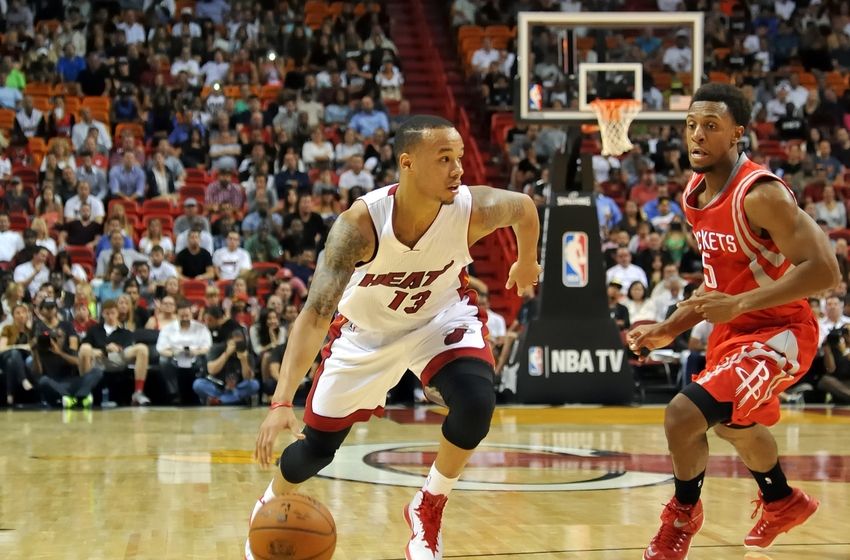 Shabazz Napier started his Miami Heat career with a bang.

As the team’s first-round draft pick (he was acquired through trade with the Charlotte Hornets) in the 2014 NBA Draft, Napier was expected to be a big-time contributor for this year’s Heat team. Although he competed for the starting point guard job with Norris Cole and Mario Chalmers during training camp, it was Cole who ended up winning the starting point position. Chalmers was shifted to being backup two-guard, leaving the rookie to handle backup duties at the one spot.

While it took a couple of weeks for the point guard to get going, he had a string of six consecutive games with double-digit scoring during the period of November 16-25. With the exception of the 95-83 victory over the Brooklyn Nets on November 17, Napier saw at least 26 minutes of playing time in each of those contests.

However, as is the case with many rookies, Napier hit a wall—over his next nine contests, he failed to score more than seven points in a game. During the month of November, the University of Duke product averaged 7.2 points on an efficient .462 shooting from the field. In December however, he averaged just 3.7 points per contest on .333 efficiency before being demoted to the D-League on two occasions during that very month.

From the period of December 17 until January 4, Napier did not play in a single game for the Heat. After being re-assigned to the D-League on December 30 and being recalled to the Heat on January 7, the rookie saw his first playing time in nearly a month in the final five minutes of the 99-83 loss to the Portland Trail Blazers this past Thursday night.

In those five minutes, Napier looked to pass the ball and get his teammates buckets rather than score. He didn’t take a single shot or free throw attempt, and his only stat was an assist to teammate Hassan Whiteside in the paint.

On December 31 before the loss to the Indiana Pacers, Erik Spoelstra stressed that the team had not lost confidence in the 23-year-old, via The Sun Sentinel:

“It will be a handful of games, but not many. But just to keep his game rhythm until he comes back. Then we’ll continue with the player development.”

When Napier began losing playing time in the rotation in mid-December, it coincided with Chalmers being shifted to starting point guard. As a result of ‘Rio being moved back to the point position, Cole became the primary backup, relegating the rookie to the bench as a result.

Spoelstra claimed the shift in the starting lineup as the real culprit for Napier’s declining minutes:

“It’s not time to be frustrated. We’re investing a great deal of time in Shabazz. He got caught in probably more than anything, a numbers game. It wasn’t an indictment on his play. We’re still trying to develop him. When his number is called, he’ll be expected to produce.”

Since the shift to ‘Rio in the starting lineup, the Heat haven’t exactly had positive results—they’re just 3-7 since. Furthermore, defense on the perimeter continues to be an issue as the team allowed 102 points to the Orlando Magic and 106 points to the Indiana Pacers during that stretch. The Magic rank 28th in the league with 93.6 points per contest, while the Pacers rank 26th in the NBA with just 95.4 points per game.

In the loss to the Pacers on New Year’s Eve, Miami allowed Indiana’s point guards to carve them up. George Hill scored 20 points, while C.J. Miles notched 25 points off the bench. For the season, Hill is averaging 14.2 points, while Miles is at just a 12.4 scoring average.

Of the team’s lackadaisical defense, Dwyane Wade made a blunt comment back in early December: “It’s a work in progress….the ball’s going in for the other team at a rapid pace.”

With the experiment of Cole at point guard being largely a failure, and the results of Chalmers back at his natural position underwhelming, now would be the perfect time for Napier to show why he should be the team’s go-to point guard.

A heavy scoring burden is not expected of the rookie—what’s expected of him is to get his teammates involved while playing solid defense.

The Heat’s scoring attack is largely carried by Wade and Chris Bosh, with Luol Deng chiming in as a legit third option every now and then. If Napier can make sure to set his teammates up with easy baskets, contribute about nine-to-10 points per contest and play within the construct of the team’s defense, Spoelstra would not hesitate to insert the rookie into the starting lineup for a spark plug.

After all, tthe franchise acquired Napier with the intention that he’d be the team’s starting point guard in the near future. Heat President Pat Riley had nothing but glowing remarks for the point guard back in June, via the team’s official website:

“Shabazz Napier is a winner, he’s a two-time NCAA champion and he’s one of the elite players in college basketball. We feel very fortunate we were able to acquire him and we feel he fits in extremely well. He has a high motor, high basketball IQ, is a great shooter and has great character.”

With the team six games below .500 at 15-21, and with four games remaining on their road trip out west, the Heat need any spark they can get.

Napier can be that spark that helps the franchise turn their season around.
[xyz-ihs snippet=”Responsive-Ad”]