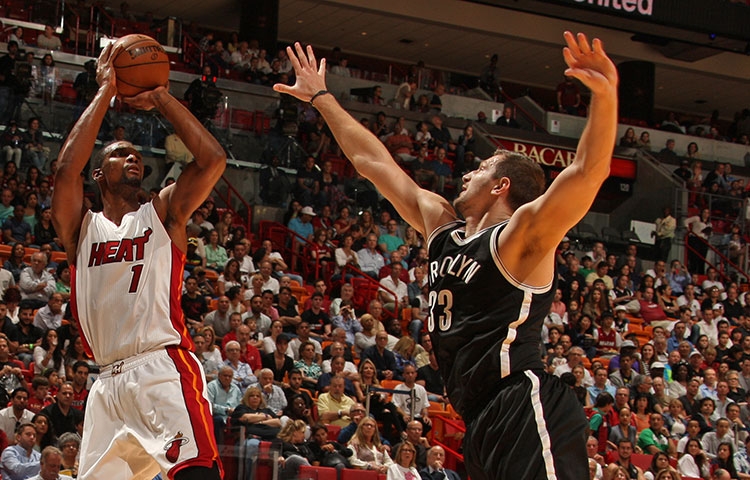 Coach Erik Spoelstra was pleased with his team’s effort on the second night of a back-to-back, particularly since it came on the heels of an embarrassing 36-point loss to the Rockets in Houston.

“It’s good to see our guys respond after last night and to not let that loss linger,” Spoelstra told reporters following the game. “To us, maybe not the outside world, we are seeing some progress.”

Though the Heat controlled the action for most of the game, the Nets stayed within striking distance until the final minute of play.

Point guard Jarrett Jack drained a short jumper with 5.2 seconds to play to cut the Heat lead to two.

Bosh was intentionally fouled on the Heat’s next possession but calmly made two free throws to provide the margin of victory and secure the team’s first win since their Christmas Day triumph over LeBron James and the Cleveland Cavaliers.

Rookie center Hassan Whiteside wowed the largest crowd of the season at American Airlines Arena (20,181) with a thunderous dunk down the lane in the second quarter after catching a perfect pass from Wade.

But Whiteside’s defense was as impressive as his offense tonight, as he blocked five shots to go along with 11 points and 10 rebounds.

“I’m just trying to defend, block shots, and do what I need to do to help my team win,” he said after the game. “I just want to keep improving. I feel like everyday I can get better.”

This was the third meeting this season between Miami and Brooklyn, with the Heat winning all three games.

In fact, it appears the Nets are just what the Heat need to snap out of a funk. All three of their victories over the Nets have come after a loss.

After traveling to Houston on Saturday and back to Miami for tonight’s game, the Heat get back on the road for a five-game West Coast swing, beginning with a matchup against the Northwest Division-leading Portland Trailblazers on Thursday.

With such a daunting road trip on the horizon, tonight’s victory was critical.

As Spoelstra said after the game, “You don’t take winning for granted when we’re having a season like we’re having.”

The Heat are currently in eighth place in the Eastern Conference, a game-and-a-half ahead of the Indiana Pacers.

Thursday night’s game tips off at 10:30 PM EST from the Moda Center in Portland, and will be broadcast on Sun Sports.
[xyz-ihs snippet=”Responsive-Ad”]