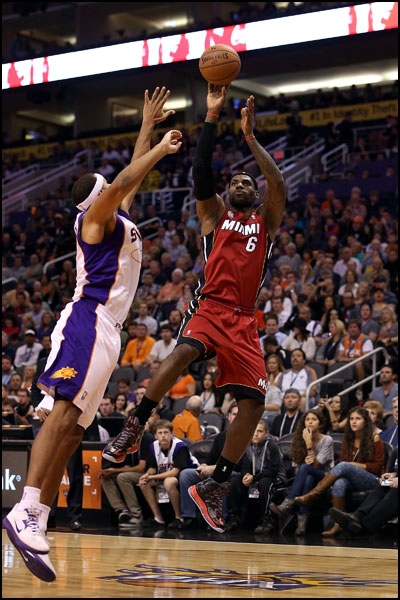 Photo By Christian Petersen: "For the second straight week, James was named Eastern Conference player of the week averaging 29.0 points, 7.3 rebounds and 7.0 assists during the road trip."

16.  That is the number LeBron James had printed on his mouthpiece for the 2012 NBA Playoffs.  It takes that many wins through four playoff series in order for the Miami Heat to repeat as NBA Champions.

So after just 11 games why be concerned about your players longevity?

Because every superhero, MVP, or human for that matter, needs a little rest and relaxation before retooling; even if they are in the prime of their athletic career at 27 years old, a three-time regular season MVP, and arguably the greatest basketball player in the world today.

After a 4-1 start, Miami is coming off of a difficult six game road trip that saw Chris Bosh go for a career-high 40 points, James go for 38 and nearly got a triple double on three instances and not to mention, had Dwyane Wade miss the last two games with a foot injury.

Fortunately, Miami will play 11 of their next 12 games in South Beach at the American Airlines Arena.

“We’ve got a lot of guys banged up, so the schedule is working out for us. Finally,” James said.

Miami finds itself in a peculiar third place in the Eastern Conference standings behind the New York Knicks and Brooklyn Nets.

While it is still early in the season and seeding is a moot point, the Heat are playing for the chance to win back-to-back championships that will require playing through the month of June, which seems light years away still.

For the second straight week, James was named Eastern Conference player of the week averaging 29.0 points, 7.3 rebounds and 7.0 assists during the road trip.

After winning the 2012 NBA Finals MVP back in June, James led USA to a gold medal in the London Summer Olympics, becoming the first USA player to record a triple double.

Between the Olympics and start of training camp, James only took two weeks off to recover before hitting the restart button on the grind of a full season.

Although Miami won their first championship with the “Big Three” last year, it was a shortened season due to the lockout and this year provides several challenges to repeat.

If Miami wants to get through a full 82-game season and pursue through the playoffs as they did last year, they will need to consider resting James at a certain point in order to preserve his ability to take over a game on both sides of the court.  He has played an average of 40.0 minutes per game over the past four games all on the road, which the Heat have gone 3-1.

James is the ultimate “point forward” having the ball in his hand to facilitate the offense and find the plethora of open shooters that team President Pat Riley has assembled.

However, James is also the cornerstone for the Miami defense and not to mention, is leading the team averaging 9.0 rebounds per game.

Point being, he will need some rest if Miami wants him to last through another playoff push.

Coming off of knee surgery this summer, Dwyane Wade has missed several games due to illness and an ailing left foot.

The Heat have played it cautious with Wade and his strew of injuries, deciding to ride the broad shoulders of James to an 8-3 record.  But with the limited amount of rest James has had, it would be wise for Coach Erik Spoelstra to consider sitting James a few games once Wade returns to form.

The Heat have two stints in December where resting James could and should be considered. The first of which is a six game span in only nine days that begins in Washington, who is winless at home, followed by five straight at home.

It is to say the least, “taxing,” to play that many games that often, but there is a key component that should not to be overlooked during the span.  Only one team, the New York Knicks, have a winning record.

Against these bottom feeder teams, Miami can afford to be without James for at least one or two of them and sacrifice losing one of those games in order to preserve their MVP for the long haul.

To finish the month of December and the 2012 calendar year, the Heat have a Christmas Day showdown and NBA Finals rematch at home against the Oklahoma City Thunder.  Barring a serious injury, James will be in the lineup to face off against Kevin Durant on ABC in the primetime slot.

The next four games will all be on the road before heading home to square off against the Dallas Mavericks.  The four teams, Charlotte, Detroit, Milwaukee, and Orlando have a combined 16-23 record, with Detroit only having two wins thus far.

This would be an opportunity for Spoelstra to give James one of those days off to rest, and should do so periodically prior to the final leg of the regular season.

The Heat are the favorites to win it all this year, but if James does not have time to rest it could be a fatal mistake that could prove costly during those physically demanding playoff series where he could possibly face off against stars like Carmelo Anthony, Paul Pierce, and possibly another showdown against Durant.