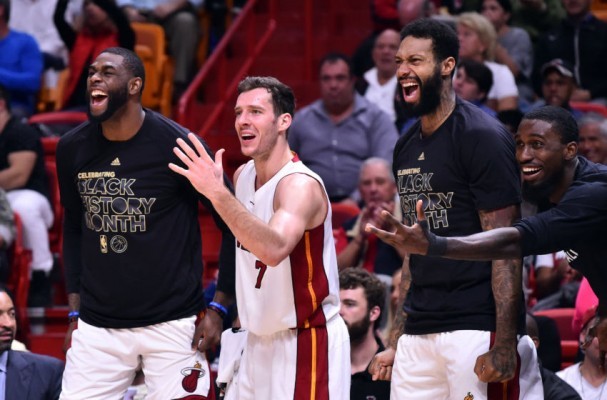 It’s safe to say things have changed since then.

Since Jan. 15, the Heat have the best record in the NBA, going 22-5 over that span. Somehow, they’ve gone from second-worst team in the league to playoff contenders. They aren’t just beating bottom-feeders in a weak conference, either. They’ve been steadily stacking quality wins over top-tier opponents for some time now.

They beat the league-leading Golden State Warriors while Kevin Durant was still healthy. They beat the Houston Rockets — not once, but twice. They even downed the Cleveland Cavaliers both in Miami and in Cleveland. A few days later, they flew back to Miami to host the high-scoring Toronto Raptors. The result: a blowout victory for the Heat.

So, how does an 11-30 team with exactly zero All-Stars win 22 games in two calendar months?

Well, for starters, it helps that they’ve seen significant upticks in virtually every statistical category. For instance, since mid-January, Miami ranks first in the league in 3-point shooting percentage (40.6 percent), third in defensive efficiency (102.3 defensive rating) and sixth in offensive efficiency (110.9 offensive rating). These sudden improvements have helped the Heat tie the eighth-seeded Detroit Pistons at 33-35. Detroit still holds the eight-spot due to a tie-breaker, while Miami is currently ninth.

With all this in mind, it’s no wonder ESPN’s Marc Stein recently slotted the Heat as the No. 10 team in his NBA Power Rankings.

“The Heat have been a 3-point machine over these past 25 games, with Dion Waiters playing the ball of his life,” Stein put it simply.

It’s true — Dion Waiters has been a revelation. The uber-confident two-guard is averaging career-highs in points, rebounds and assists (16.1 points, 3.4 rebounds and 4.4 assists per game), all while shooting an impressive 40 percent from beyond the arc. Recently, his game has even inspired some to draw comparisons to former hometown hero and fellow shooting guard Dwyane Wade.

“We’ve got the same initials, our games are similar,” Waiters said. “Difference is, he’s got them three rings. He’s a Finals MVP. Top three best shooting guards all-time. I’m chasing that. He’s one of my favorite players, one of the players I idolized my game after. When he’s playing against me, I’m checking things he’s doing.

“Hopefully, one of these summers, we can get together and he can teach me some of the tricks of the trade of getting fouled more. I am definitely going to reach out to him to see if I can propel my game to a new level. That’s what the best players do. You see Kobe [Bryant] with Michael [Jordan]. A lot of guys go to Hakeem Olajuwon to learn. D-Wade’s my guy, one of the best players to ever play the game. It’s always been little brother, big brother from afar. I want to pick his brain.”

In all fairness, it isn’t just “Neon-Dion” that’s been lighting up the stat sheet for Miami in 2016-17. A handful of Heat players are having stellar seasons in Miami. Goran Dragic — for example — is playing like a man possessed. The Slovenian point guard is leading the team with 20.4 points per game to go along with his 5.9 assists and 3.8 rebounds per game.

Meanwhile, journeyman James Johnson is shattering expectations with career-highs in points, rebounds, assists and 3-point field goals made. He’s arguably on pace to win the NBA’s Sixth Man of the Year award and is a worthy candidate for Most Improved Player, too. Johnson credits his top-notch conditioning and the Heat organization as a whole for his newfound success:

“I feel like that the more weight I lose, the more I unleash skills that I didn’t think I was capable of having or doing,” Johnson told Anthony Chiang of the Palm Beach Post. “Just being able to do more things agility wise. I can move, cut through smaller spaces, and definitely give more effort out there in the game. I can go from 100 effort to 150 now.”

Like James Johnson, guard Tyler Johnson is also averaging career-highs in points, rebounds, assists and 3-point field goals made. Wayne Ellington and Hassan Whiteside are each averaging career-highs in points, as well. Furthermore, Whiteside continues to lead the league in rebounds with 14.3 per game. He’s even turned heads by grabbing 15 boards or more in 32 separate games this year.

Evidently, this group of relative “no-names” has found a way to right the ship in Miami. But what could possibly account for such an unprecedented turnaround?

“Everybody is looking for a defining moment. What turned the season around?” Heat head coach Erik Spoelstra pondered Tuesday. “There isn’t one moment, but the thing that is most gratifying about this group is that even when we were losing, everybody was still committed to coming in with a consistent approach every day to try and get better. We were building habits while losing, and you could see progress. You could see our team getting better.”

It may just sound like “coach speak,” but it’s true. Despite the massive hole they dug for themselves, no one in Miami ever considered throwing in the towel. Instead, they took things one game at a time and focused on getting better.

Spoelstra has led this obscure group of castaways and former D-Leaguers on a historic turnaround that is truly something to marvel at. Given the total transformation Miami has gone through these last two months, current and former coaches like Dallas’ Rick Carlisle, Detroit’s Stan Van Gundy and Miami’s own Pat Riley consider Spoelstra to be a strong candidate for the NBA’s Coach of the Year award.

The Heat now force teams to bring their “A-game” each and every night — or risk being run out of the gym. Opposing coaches and players have finally started taking Miami seriously — as a force to be reckoned with. To put it quite simply, the Heat can no longer be ignored as they continue to move their way up the standings.
[xyz-ihs snippet=”Responsive-ImagenText”]