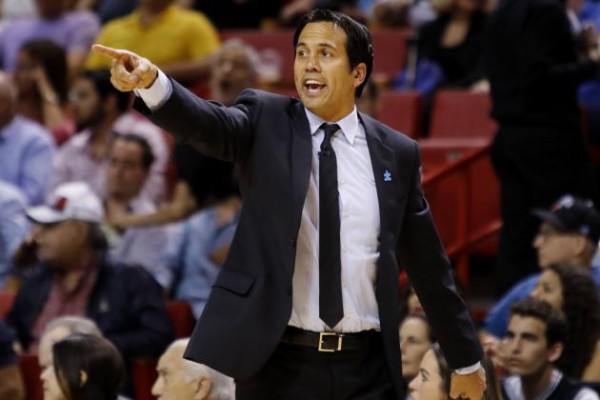 For the past two months, the Miami Heat (31-34) have been one of the best stories in basketball. After falling to 11-30 in early January, the Heat have won 20 of their last 24 games and currently sit a half game back of both the Detroit Pistons and Chicago Bulls for the final two playoff spots in the Eastern Conference.

Although much of the credit could be attributed to the likes of Goran Dragic, Dion Waiters, James Johnson and other players, the one constant has been head coach Erik Spoelstra.

The amazing turnaround has powered Spoelstra into the national spotlight and Coach of the Year discussion. On Thursday night, Heat president Pat Riley said that the head coach “absolutely” deserved strong consideration for the award and much more, per Manny Navarro of the Miami Herald:

“Everybody likes to sort of compartmentalize a coach’s career,” Riley said at the Heat’s 11th annual “Family Affair” gala at AmericanAirlines Arena. “The man has won two world championships. He’s been in more big games with a different team. There’s always challenges when you have great teams that are supposed to win. Everybody thinks that’s an easy ride. It may even be more of a difficult ride with all the things going on behind the scenes and dealing with superstars. And then there’s this kind of challenge in which I think he’s handled adjointly and with great experience and by staying the course.”

Spoelstra, who has a 430-275 record in nine seasons with the Heat, once finished as runner-up in 2012 to George Karl for Coach of the Year. And one reason the 46-year-old has flown under the radar may because of his All-Star caliber teams, including the likes of Dwyane Wade, Chris Bosh and LeBron James, for the majority of his career.

However, this is the first season Spoelstra has coached a Heat team without a single All-Star. The results, including a Coach of the Month award, have been tremendous. Although his past work has showcased some of the best players in the world, the two-time champion is starting to see the fruits of his long labor. Riley related himself to the current coach and laid out some of Spoelstra’s expectations:

“He’s a lot like me. The first time I got my Coach of the Year award I was embarrassed to go and get it because I got it with a team behind me of Kareem Abdul-Jabbar, Magic Johnson, James Worthy, etc. That residual reward will come to [Spoelstra]. The [awards] that he has that are more important to him are the ones that he’s got on wearing on his fingers,” said Riley. “So, he deserves all the credit that he’s getting right now but he’s not liking it. He just wants to keep working and get this thing to where it should get to before you start people on the back and then sometime in April something might go the other way. Let’s finish the job – that’s what he’s about.”

The end goal will certainly be landing a playoff spot. Without doing this, it would be hard to boost Spoelstra’s case for Coach of the Year. Nonetheless, the head coach will focus on winning and keeping his eyes off the awards for now.
[xyz-ihs snippet=”Responsive-ImagenText”]