Dion Waiters Wants to Stay Long-Term With Heat, Will Reach Out to Dwyane Wade 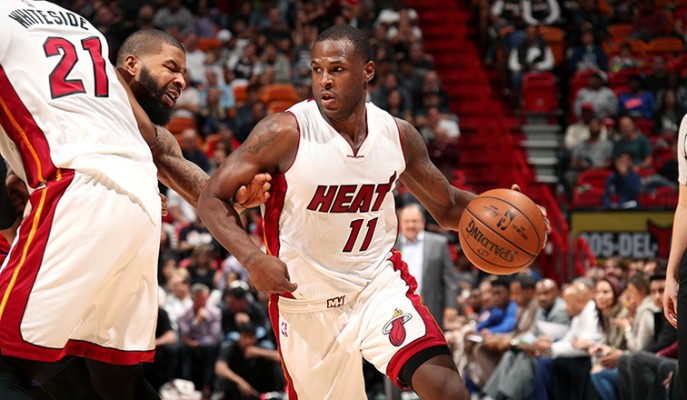 Having served as one of the keys to the Miami Heat’s recent success, shooting guard Dion Waiters is helping to make his case for a big free-agent contract following the 2016-17 season. The good news for the Heat is that he’d be open to signing a new deal with the team.

Barry Jackson of the Miami Herald wrote that the 25-year-old Waiters isn’t looking to drag out the free-agency process when it does occur. However, it remains to be seen if he and Miami can come to an eventual agreement.

“I want to get it done as quick as possible,” Waiters said. “Let’s keep this thing rolling by any means. I don’t want to go into free agency with a couple days and make a decision. I don’t want that. I know where I want to be. Let’s just get it done. My mom loves it here. Would be mad at me [if I left]. My son loves it. My family loves it.”

Prior to the season, Waiters had a checkered career. It began when he was the fourth pick of the 2012 NBA Draft, when the then-downtrodden Cleveland Cavaliers selected him. Just months after LeBron James had returned to the team, Waiters was dealt to the Oklahoma City Thunder in January 2015 as part of a three-team deal. After nearly two seasons with the Thunder, he left as a free agent and signed with the Heat last July. The two-year deal is worth $6 million, with a player option in the second year, which means that Waiters will almost certainly choose free agency before then attempting to work out a deal with Miami.

In 43 games with the Heat this season, 40 coming in a starting role, Waiters has averaged 16 points per game and has shot 42 percent from the field. However, since the Heat’s surge that’s seen them win 21 of their last 25 contests, Waiters has improved to 19 points per game and 47 percent shooting. In last Monday night’s victory at Cleveland, Waiters connected for 29 points and hit the clinching shot with 12 seconds left.

Waiters is using the Heat’s past success as a motivating tool to improve his game and reputation:

“Every day I’m in the locker room, I always look at the [Heat championship] pictures, always look at the champagne showers,” Waiters said. “I have visions about that every day. I ain’t going to stop working until I get to that point.”

One player that Waiters plans to speak with in order to get better is Heat legend Dwyane Wade, who he sees as the perfect role model:

“We’ve got the same initials, our games are similar,” Waiters said. “Difference is, he’s got them three rings. He’s a Finals MVP. Top three best shooting guards all time. I’m chasing that. He’s one of my favorite players, one of the players I idolized my game after. When he’s playing against me, I’m checking things he’s doing.

“Hopefully, one of these summers, we can get together and he can teach me some of the tricks of the trade of getting fouled more. I am definitely going to reach out to him to see if I can propel my game to a new level. That’s what the best players do. You see Kobe [Bryant] with Michael [Jordan]. A lot of guys go to Hakeem Olajuwon to learn. D-Wade’s my guy, one of the best players to ever play the game. It’s always been little brother, big brother from afar. I want to pick his brain.”

Teammate Tyler Johnson notes how well Waiters has adapted to playing in Miami, establishing chemistry that wasn’t apparent in his previous stops:

“With him, a lot of times it’s easy to get a bad rap because he’s so confident that sometimes it rubs people the wrong way because we live in a sensitive society,” Johnson said. “He’s more of an alpha male. If you don’t match his intensity, he can walk over you. What’s good on our team is we have a lot of alpha males. He’s in a place where he feels like people care about him as a person.

While the potential exists for another team to overwhelm Waiters with a multi-year offer, he’s offering strong hints that he wouldn’t mind establishing some roots in the Miami area:

“I am enjoying this thing. Whatever it takes [this summer], I just want to be here. What we’re building here, we have a chance to do something special.”