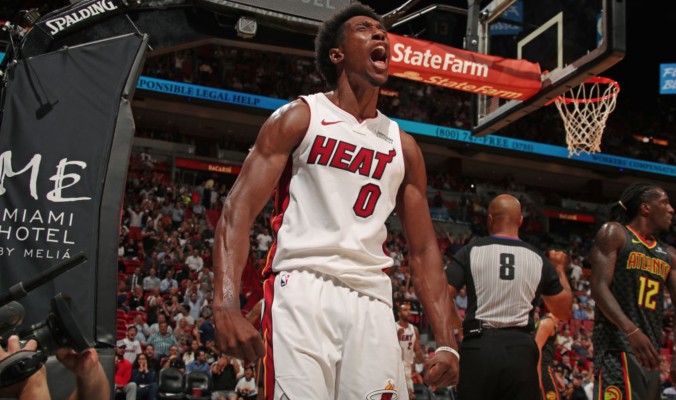 Just before the start of the season, the Miami Heat gave small forward Josh Richardson a four-year, $42 million contract extension, locking up yet another piece of their young, emerging core. Richardson, 24, has repaid the Heat’s faith, averaging 11.7 points, 3.3 rebounds and 2.5 assists, while shooting just about 40 percent from the field to start the season.

Not only is he shining on offense, but he has been playing spectacular defense as well, averaging just over steal and a block per game. Before the season, he told the Miami Herald’s Barry Jackson that he wanted to challenge Dwyane Wade’s franchise record for blocks by a wing player:

The former second-round pick’s impact is also evident through advanced stats. Richardson’s plus-minus per game is +0.7, the third highest of any key rotation player on the team. As for when he’s off the court, the Heat have a plus-minus of -3.7 per game. If that doesn’t convince you of his importance, the team has an offensive rating of 103.4 and defensive rating of 104.6 when he is on the court. Those numbers turn to 101.3 and 115.2, respectively, when he is off the court.

Richardson’s versatility also allows the Heat to mix and match different lineups. Even though he’s mainly played as a small forward, dating back to last season, he is still able to play either of the guard positions. When he’s in with the starting lineup that includes Goran Dragic and Dion Waiters, he’s able to sit near the three-point line, wait for the kick-outs and knock down shots. If defenders close out on him, he is able to drive and finish strong at the basket. When he’s in with the bench units, he’s able to take charge and create for himself and his teammates.