Don't Miss
Home / Editorials / Is It Time for the Miami Heat to Hit the Panic Button?

Is It Time for the Miami Heat to Hit the Panic Button? 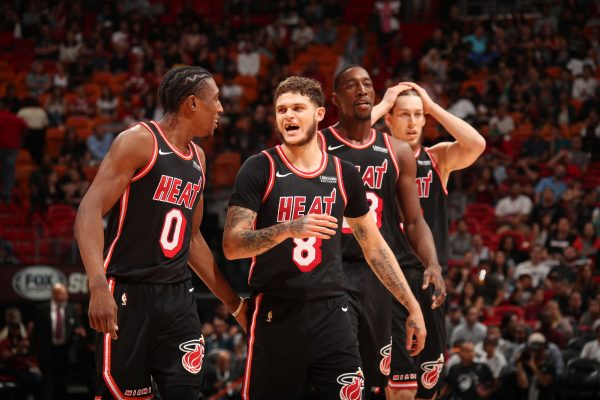 After a rough start to the season, Miami Heat fans and front office executives likely have one mutual question in mind: Is it time to hit the panic button?

In past years, NBA front offices would’ve followed the “weather the storm” motto, which worked more often than not. However, this is the modern NBA. Private roundtable discussions about possible trades find themselves leaked on Twitter and ESPN. If a player is unhappy or that notion surfaces for one reason or another, his name will swiftly be pasted on a board of acceptable trades.

Enter the Heat, who are currently dealing with more than a few problems. They are currently the 11th seed in the Eastern Conference with a 7-13 record. Although the season is still young, the Heat’s staff would be naïve to ignore the signs of needing some roster changes.

However, for fans who are stressed about the team’s early slump, there is reason for optimism. The Heat are fortunate enough to not have locker room issues or players demanding trades, which are two sure signs that a team is at the bottom of a power-struggling totem pole.

A Trade in the Works?

Sure, the Heat don’t have players demanding trades at the moment, but it seems the front office wants otherwise:

“We need a trade,” one Heat official said, according to the Miami Heat Beat’s Ethan Skolnick. “Badly.”

The front office’s hands have been full after losing out on the Jimmy Butler sweepstakes. It finds itself waiting on any reasonable scenario to present itself. Since the trade deadline is far over the horizon at the moment, the Heat could exercise patience in a weak Eastern Conference and wait for the right deal to materialize.

That moment could happen sooner than later, however, as 10-time All-Star Carmelo Anthony is reportedly a likely target for the Heat after recently parting ways with the Houston Rockets. The acquisition would deliver a star while also giving head coach Erik Spoelstra more flexibility in his game-planning.

The Heat also could be in the mix for disgruntled Washington Wizards point guard John Wall.

Let’s be honest, health is basically a skill set in today’s game. Given the Heat’s injury list through the first 20 games of the season, it’s safe to say the team is lacking that particular skill. Miami has yet to play a game with its full starting five, as Dion Waiters is still rehabbing from an ankle injury. Among other nagging health issues, the Heat’s roster is full of seemingly injury-prone players at the moment.

No expert can safely judge what this team would look like if healthy, but one can assume it’d look better than it currently does. It has lost five of its last six games. In contrast, the Heat finished sixth in the East last season with a 44-38 record.

“[We have to] learn from this pain,” Spoelstra said following a loss to the Philadelphia 76ers on Nov. 12. “Pain and the experience of that pain can be a great teacher. I know everyone in that locker room is feeling that pain. We have been in a lot of these close games and we will find a way to get better.”

“We’re all aware of it, that we need to have a sense of urgency,” echoed guard Wayne Ellington. “We’ve got to get better and look around at each other and look at ourselves in the mirror and go from there. Like I said, we’ve got the character guys that we can make that turnaround. We’re going to.”

With the emergence of young studs in Josh Richardson, Rodney McGruder, Justise Winslow and Hassan Whiteside continuing to blossom, this team can become a threat as the season progresses. Barring any setbacks from injuries, the Heat still have plenty of time left to turn this ship around.
[xyz-ihs snippet=”HN-300×250-TextnImage”]