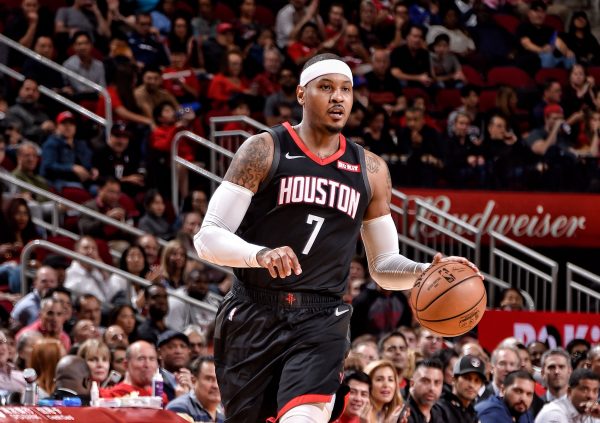 10-time All-Star Carmelo Anthony may very well find his new home with the Miami Heat, according to Sean Deveney of SportingNews.com:

“League executives contacted by Sporting News speculated that Miami, which has been looking to add scoring punch off the bench, would be the most likely landing spot for Anthony. The Heat and Anthony’s representatives met to discuss the 10-time All-Star forward possibly joining the team before he signed with Houston last summer. Anthony, notably, also is a close friend of team mainstay Dwyane Wade.”

Anthony recently made headlines after it was reported that he and the Houston Rockets would “more than likely” part ways. As of Thursday, Rockets general manager Daryl Morey confirmed that the team would be parting ways with Anthony.

Rockets head coach Mike D’Antoni stated that Anthony “wasn’t fitting” into Houston’s offensive scheme. Anthony has only appeared in 10 games this season, which poses a head-scratcher as to why the urgency from Houston’s front office to move on from the forward.

At the age of 34, the Syracuse University product is a shell of his former self. His once acceptable athleticism has slowed over the past few seasons and his defense can sometimes appear lackadaisical. However, his offense can still ignite on any given night. He’s scored over 20 points in three of his ten contests this season, his latest being 28 points on 9-of-12 shooting in a win against the Brooklyn Nets.

Landing Anthony would pair him with close friend Dwyane Wade, which will add more chemistry to the roster while also aiding the younger players with more veteran presence. With the constant injuries to the Heat’s roster, the front office could look to make a move for Anthony, which could boost scoring on nights when the bench is thin.
[xyz-ihs snippet=”HN-300×250-TextnImage”]