Dwyane Wade’s Health, A Cause For Concern 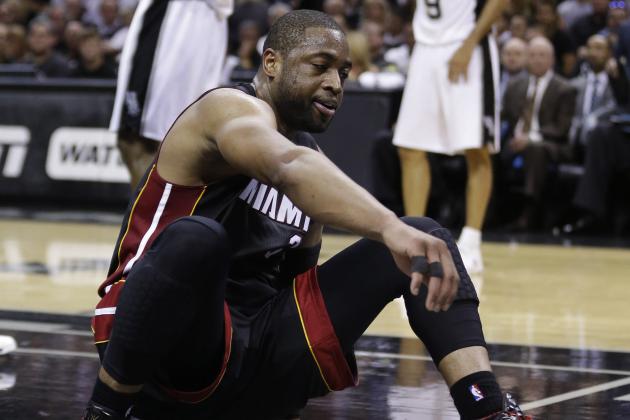 Dwyane Wade has been the embodiment of the Miami Heat organization for the last 12 years.

Since being drafted with the No. 5 overall pick in the 2003 NBA Draft, Wade has won three championships, including leading the franchise to its first NBA title in 2006. He has won a scoring title and has been paired up with Shaquille O’Neal, and later with LeBron James and Chris Bosh. Whether it was with O’Neal or James and Bosh, “Flash” has led the Heat to an enormous amount of success over the past decade.

However, while Wade was on the court for most of those years, lately he’s been spending a lot of time on the bench.

The man they call “Flash” has missed the last seven games for the Heat due to a hamstring injury. During that stretch, the Heat have gone 3-4.

Wade played the first eight games of the season with very little issue. The Heat were 5-3, and Wade had played three back-to-back sets within the first couple of weeks of the season. That matched his total from the 2013-14 season, in which he played just 54 games due to recurring knee problems that plagued him throughout the season.

Despite predictions before the season that had many stating that “Flash” was past his prime, that was far from the truth—Wade has averaged 19.8 points and 6.4 assists on 51 percent from the field so far this season. In the absence of LeBron, the veteran shooting guard is averaging more points per game than last season (19.0) and remains one of the most efficient guards in the entire league.

While Wade has still proven his worth as a franchise player without the four-time MVP, the questions no longer pop up of whether Dwyane can still play or not—it’s whether he can remain healthy enough to remain on the court for Miami.

“For myself, having dealt with injuries, I’m very scared about Dwyane Wade. These seven games, at this point in the season, it is either an injury or a nagging injury, but now it is a game changer. You have offseason, preseason and time to rehab the knee. Last year, you had the luxury of saying LeBron can take over. But because it is happening now, his body is saying, ‘Sit down young fella and get some rest.'”

Without their key facilitator, the Heat have struggled at times to put points on the board. In the seven games without Wade, they’ve averaged 95 points per game. During the first eight games of the season with “Flash” in the lineup, the Heat averaged 99 points per contest.

Since losing the 12-year veteran to injury, the Heat have eclipsed the century mark just once in their previous seven matchups. With Wade, they passed the 100-point mark on five occasions in eight games.

Webber followed up on his remarks by stating the Heat’s offense won’t function well in the absence of the former Finals MVP:

“It is tougher without LeBron and Wade. Now you don’t have a penetrator. They are going to have some trouble as long as they don’t get D-Wade back. I don’t know if they can win without having a facilitator like D-Wade on the court.”

Luckily for the Heat, its only 15 games through the season and the University of Marquette product is supposed to be back in time for Sunday’s game versus the New York Knicks. At the moment, Miami is 8-7, currently good for sixth in the East, and just a game-and-a-half behind the Washington Wizards for the division lead.

However, if Wade’s injuries continue to persist, it will present problems for the Heat. Miami has already been the most injury-plagued team in the league not named the Oklahoma City Thunder. Josh McRoberts, Udonis Haslem, Chris Andersen, Justin Hamilton, Danny Granger and Luol Deng have all missed games this year due to injuries.

Unlike in previous seasons, they don’t have a four-time MVP to shoulder the load while key players such as Wade miss games because of injury.

Bosh, who is now the Heat’s No. 1 option on offense, needs a true No. 2 option to alleviate pressure and double teams. Without “Flash” on the court, the Heat’s offensive firepower dies down no matter how efficient Mario Chalmers and Deng can be.

Wade recognizes the offense is better when he is in the game, but acknowledges the team needs to be better whether he’s on the court or not, via Ira Winderman of The Sun Sentinel:

“Obviously, its better when I’m in the ballgame, to be able to control the game a little more, get guys shots. But, at the same time, that doesn’t guarantee that I’m going to be there or Chris is going to be there every time. We have to continue to work our habits.”

If Miami is to remain one of the true elite teams in the Eastern Conference, they will need a healthy D-Wade for the entire season. In the absence of Wade, in four of the team’s seven games against teams with winning records, the team has lost all four games by an average margin of 13 points a game.

If the Heat are to match up with the Toronto Raptors and Chicago Bulls in the playoffs, the man they call “Flash” will need to be on the court and healthy.
[xyz-ihs snippet=”Responsive-ImagenText”]