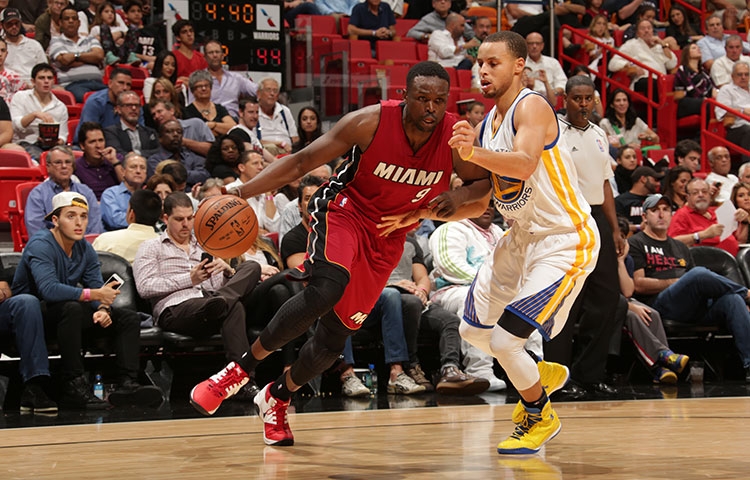 (Miami, FL) — In a down-to-the-wire showdown, the Miami Heat (8-7) lost to the formidable Golden State Warriors on Tuesday night at the American Airlines Arena.

The Heat played their seventh consecutive game without key player Dwyane Wade, but managed to show some promise against the offensively ranked eighth team in the league. Warriors franchise superstar, Stephen Curry, dropped a season high of eight three-pointers with a whopping 40 points, bringing the Warriors their sixth consecutive victory. Coming off of two 17-point games, Curry left viewers in awe, hitting 12 of 19 from the field including eight of 11 from three to go along with three steals and seven assists.

“You always stay confident…stay ready,” Curry said. “You win games all sorts of ways with different individual performances. How we shot last game had nothing to do with this game. If we execute our offense well, you’re going to get good shots.”

The second “Splash Brother” in Klay Thompson also had an efficient showing, scoring 24 points on 10 of 19 from the field. “The way Curry and (Klay) Thompson shoot, it’s a nightmare to defend,” Chris Bosh stated, prior to the game.

Meanwhile, Miami had a strong start to the game. Bosh led Miami, shooting 10 of 16 from the field with 26 points and nine boards, followed by Luol Deng who scored 16 points and Mario Chalmers who put up 14. Chalmers had a personal first quarter best of 13 points; the point guard from Alaska dropped his 17th triple of the season and 600th of his NBA career. He started the game shooting four of six from the field and led the Heat to a 36-30 lead at the end of the first quarter; a record-breaking first quarter start for the Heat.

“They played their best basketball in the fourth quarter,” Heat coach Erik Spoelstra said. “We got caught up in some tough possessions. Their defense really stepped up and then they started to score and we just weren’t able to sustain from there.”

Despite the Warriors’ being ranked number one in field goal percentage and a first quarter field goal accuracy of 64%, Miami still managed to maintain a lead against them in that time frame. It was the first time this season that the well-rounded Warriors let a team shoot above 50% from the field. By the third quarter, although the Warriors were shooting at a 62.7% clip, it was the Heat’s chance to clinch the deal and outscore Golden State, but they squandered it, letting the Warriors put more points between themselves and Miami.

“I don’t really get what we think or what we do down the stretch against good teams, the elite teams,” Bosh said. “For some reason we just forget everything – offense and defensive execution.”

Thompson then added a few more three pointers and the Warriors took the lead in the fourth, 99-95. Back-to-back three pointers by Curry and Thompson brought the Warriors point total to 107 with 2:50 to go, showing the Miami Heat and the rest of the world that they are ready to contend for a title.

Miami’s challenge in this game was not staying with the game or putting up points; they did both admirably and competed fairly with a championship-contending team. The struggle they had and continue to have, surrounds the injuries that have plagued the team throughout the season. Despite having Norris Cole back in the game, the guard was simply unable to play to his full potential due to self-described discomfort from his dislocated finger. Saturday night’s game against the Orlando Magic was the first time in 160 games that the guard sat out, ending his streak that landed him number two overall in Miami Heat history for most consecutive games played. The Heat also suffered the absence of Chris Andersen to a sprained ankle, and of course, Wade sat his seventh consecutive game out to a hamstring injury.

The Heat look to bounce back as they visit Madison Square Garden on Sunday, November 30, at 7:30 PM E/T.
[xyz-ihs snippet=”Responsive-ImagenText”]