Could Dwyane Wade Be Joining LeBron James In Cleveland? 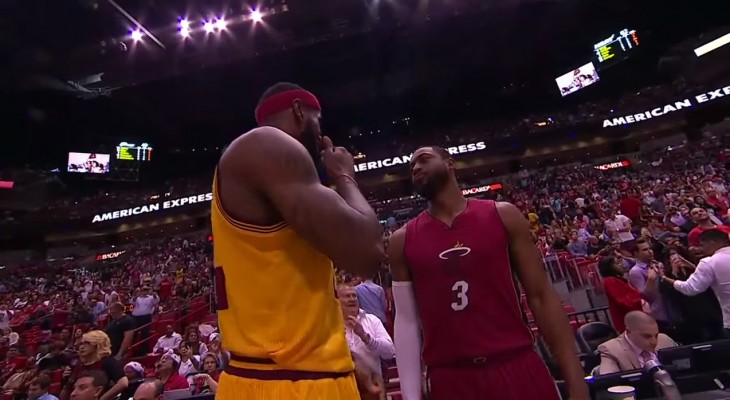 On Thursday afternoon, Miami Heat fans received the news that franchise star Dwyane Wade could opt out of his contract during the summer and become a free agent.

It was never seen as a plausible possibility that Wade, the Heat’s 12-year veteran, could depart Miami and be seen in a different jersey during the 2015-16 season.

What has been reported thus far by Barry Jackson of The Miami Herald is that both Wade and the organization “have a significant difference in contract negotiations” and that “Wade is open to leaving the Heat.”

The main gripe that has been noted is that Wade believes he’s undervalued at $16.1 million.

That presents a problem in itself because the Heat are already devoting $23.6 million on average to Chris Bosh over the next four seasons. Goran Dragic become a free agent this summer and will likely command a max contract which means Miami will have to pay Dragic around $21.8 million annually. This isn’t even factoring in the impending free agency of Hassan Whiteside in 2016.

At age 33 and coming off of another injury-prone season which saw him miss 20 games, it’s hard to envision Wade receiving more than what he’s making from the Heat at the current moment.

Heck, it was Wade after all who opted out of his previous contract during the summer of 2014, which would have paid him $41.6 million over the next two seasons. It was all in an effort to give the franchise more cap flexibility to keep the Heat a contender with or without LeBron James.

Fast forward to a year later and it would seem Wade’s intentions are now contradictory of his initial intentions last summer.

What is really going on here?

Does Wade really want more money? Or is it that Wade doesn’t believe that the organization can build a contender and he’s looking for a way out, perhaps to Cleveland to join LeBron?

Just a month prior during the team’s exit interview sessions at the conclusion of the season, Wade stated his confidence in the organization’s ability to build contenders:

“I know one thing about the Heat organization. We’re not going to just sit around and hope. We’re going to try to figure out to make sure we can be as competitive an organization as we became accustomed to.”

While Heat Nation would find it hard to fathom that Wade could depart from Miami, crazier things have happened. As much as Heat fans want to believe “Flash” will remain loyal to the franchise, the NBA is a business first and foremost.

Having said that, no one knows exactly what No. 3’s intentions truly are. The only person who knows what No. 3 wants is Wade himself.

What we do know is that Wade is unhappy with his current situation, whether it’s the contract or the fact that the Heat are coming off a 37-45 season. Meanwhile, LeBron is about to play in yet another NBA Finals in his first season back with the Cleveland Cavaliers.

Wade’s agent, “He’s had a tremendous career [with the Heat] and we’re just trying to see whether or not there’s room to continue that.”

The veteran shooting guard knows his time is coming to an end. Yes, he did have a resurgent season with all things considered. However, it doesn’t take away from the 12 years of service or the mounting injuries that continue to persist for Wade.

With Kevin Love due to be a free agent this summer, Cleveland would have extra cap space to create a new “Big Three” featuring the likes of Wade, James and Kyrie Irving. Due to championship aspirations on the line, it would come as no shock if Wade were to take a lot less money from Cleveland entering his 13th NBA season.

Does anyone remember what was said between LeBron and Dwyane following their matchup on Christmas Day last year? Following the final buzzer, James and Wade embraced on court with a hug. LeBron reportedly said the following to his former teammate:

“Like I said, if we aren’t better this year, we’re gonna re-unite again and do some bigger and better things, alright?”

It makes matters more interesting that Wade was forced to continue to be Miami’s No. 1 option in a season where Bosh was expected to take over that role. In Cleveland, or even elsewhere with the Chicago Bulls, Wade would not be leaned on so heavily to carry the offensive workload. Just as important is that both teams are so stacked that they would be patient in waiting for Wade to recover from an injury if it ever were to get to that point.

The 11-time All-Star missed 20 games during the 2014-15 season due to recurring injuries involving his knee and hamstring.

During his exit interview session, Pat Riley stressed the need for his team—including Wade—to remain healthy and on the court for the 2015-16 season: “There’s no doubt we’re going to need Dwyane every single night that he’s available.”

Ira Winderman of The Sun Sentinel brought up an interesting point in regards to No. 3 potentially leaving Miami on Twitter:

Remember, Wade did meet with Bulls in 2010 prior to Big Three formally signing. Bottom line: Heat and Wade already in discussions.

In today’s sports landscape, loyalty is secondary to many things. It’s still unknown how this situation will develop, but there is little doubt that Wade could conceivably opt out of his contract to join a contender such as the Cavaliers or the Bulls.

The Heat have a pressing matter on their hands, and they need to get it straightened out quick before their legendary guard leaves for good.
[xyz-ihs snippet=”Responsive-Ad”]