Miami Heat News: Dwyane Wade May Opt Out of Deal with Heat 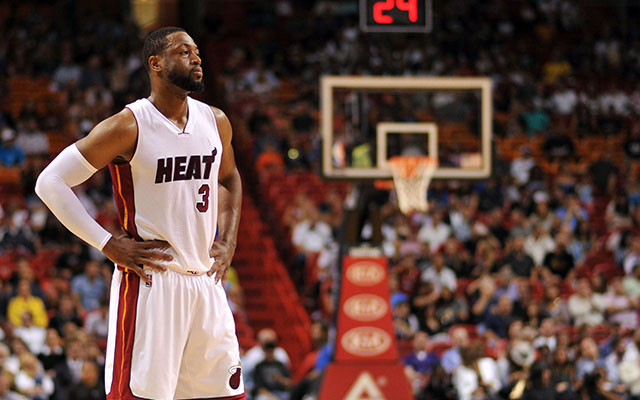 While considered unthinkable just a month ago, the unexpected may just happen—Dwyane Wade could opt out of his deal this summer.

Barry Jackson of The Miami Herald reported Thursday afternoon that there was a “significant difference” in contract negotiations and that Wade is “now open to considering other teams this summer if the Heat don’t raise its offer.”

As we noted in the link, Wade prefers to remain in Miami. But he also wants the financial respect that someone who has done so much deserves

Second source on Wade: He’s “prepared” for anything. Buckle up, Heat fans.

Wade’s agent, Henry Thomas, says: “I am going to continue to have conversations with the Heat and try to make this work” but won’t….

… say likelihood of Wade leaving or whether Wade will definitely opt out. Wade’s preference is to opt out & get big 3-yr deal from Heat.

The veteran shooting guard holds a player option for the 2015-16 season worth $16.1 million. The issue for the Miami Heat is that they already have $23.6 million on average tied up to Chris Bosh over the next four years and are attempting to re-sign Goran Dragic this offseason. Dragic could be earning as much as $21.8 million annually considering he is the top point guard on the free agent market.

Wade is coming off a resurgent season at the age of 33. Although the Heat missed the postseason, No. 3 averaged 21.5 points on 47 percent shooting while playing in his 11th consecutive All-Star Game.

The 12-year shooting guard believes he should be paid more. The question is, are the Heat willing to shell out more money for a 33-year-old guard who missed 20 games due to recurring injuries last season?

Outside of Dragic, Miami will have to make the decision on whether or not to offer Hassan Whiteside a new contract when his current deal expires in 2016. Though the salary cap skyrockets from $67 million to $89 million in 2016, the Heat would have almost no cap space to sign a small forward and bench players if it were to retain Wade, Bosh, Dragic and Whiteside.

Wade’s agent, Henry Thomas, stressed the plan is to still keep Dwayne in Miami for a 13th season:

“With the amount of time he has spent with the organization, every effort will be made to try to work something out. The five times he played for a championship, resulting in three championships, is a significant accomplishment for any professional. We are continuing to talk about a resolution that would be satisfactory to both sides.”

If the Heat are unwilling to offer more money to “Flash,” we may have seen the last of Wade in the red and black.
[xyz-ihs snippet=”Responsive-Ad”]