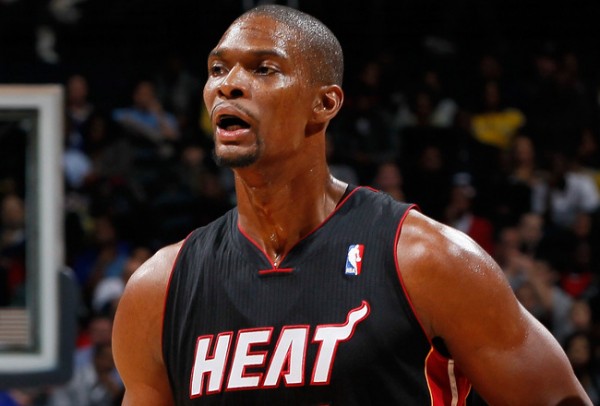 Taking a look at the 31-year-old Chris Bosh’s Twitter feed, you would never know just how much rests on his lofty shoulders. Facing a thirteenth NBA season — one that will feature a high level of scrutiny for the ten-time All-Star — he couldn’t be more carefree.

The near-seven-footer is seemingly making the most of his leisure time this summer, often tweeting photos of his activities which involve spending time with his children, playing the guitar, and, most surprisingly, filming television shows.

Although certainly not known for his acting talents (despite the occasional cameo and a well-documented Youtube campaign for MVP votes), CB is sharing his signature smile with network television audiences this fall, making appearances on the Miami-centric “Rosewood” as well as NBC’s “Hot and Bothered” where he will appear as himself beside actress Eva Longoria. Longoria lauded Bosh’s acting ability.

It’s a welcomed change from just six months ago, when potentially life-threatening blood clots found in Bosh’s lung put a hold on the Heat’s playoff hopes and put his NBA career in jeopardy.

“I wish I could go back and tell myself not to do those things, but I’m lucky to be alive. I am. I took that as a lesson to stop trying to be a tough guy all the time,” reflected Bosh.

Treatment following Bosh’s scary ordeal was 100% successful and Bosh is now a healthy man. However, resuming his NBA career and regaining elite status is not a foregone conclusion.

Although his body has healed, his biggest challenge this upcoming season won’t be a physical one. Bosh enters the 2015-16 season with one of his best supporting casts to date. The Miami Heat have fortified their bench with productive veterans Gerald Green and Amar’e Stoudemire.

The team also features Justise Winslow and Hassan Whiteside — youngsters with enormous potential for explosive performances. For Bosh, this means more help on offense and a decreased defensive load, which also means more pressure on the 12-year veteran to help lead the team to the promised land.

In addition, some members of his very talented supporting cast have shown themselves to be moody at best (Google results for Stoudemire and Green will even bring up the dreaded adjective “mercurial”) and his future Hall-of-Fame co-star, Dwyane Wade, is not typically able to maintain perfect health throughout the regular season.

There will most certainly be regular season games where the Heat will look to its second-in-command to play the alpha dog role. There will be times where Bosh’s happy-go-lucky demeanor will be challenged by having to quell a fire (e.g. he’ll have to stop Whiteside at times from losing his cool and avoiding that second technical). The 10-time All-Star may also have to give Goran Dragic, who has yet to play to his potential in Heat uniform, a few pounds to the chest to put an end to a slump or a particularly turnover-happy performance.

Never one to sulk, Bosh appears to be in good shape both physically and emotionally following such a dismal end to last season. Facing high expectations, the Heat would do well to mimic his mature, steady demeanor.

There is no room for emotional breakdowns or inexperienced mistakes. With the window slowly closing on Wade’s hopes for a fourth ring, this very well may be the year where Bosh is promoted from a second banana to a 50/50 partner in leadership.

Meanwhile, Bosh has perhaps unwittingly set a tone for this season by quite literally broadcasting his return to good health and good spirits. He has been tight-lipped about his struggle these last few months, instead showing only his usual smile. He’s seemingly saying “When I’m challenged, I don’t sweat it. And neither should you. Take note, teammates.”
[xyz-ihs snippet=”Responsive-Ad”]