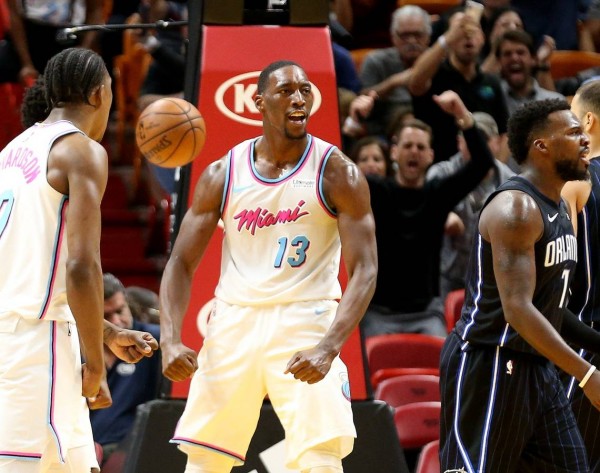 At first, it was unclear where Adebayo would fit in Miami’s loaded frontcourt, but he quickly displayed the kind of skill and talent that got Heat fans everywhere very excited about his future.

It now seems that the fans aren’t the only ones excited about the young big man’s potential. According to one unnamed scout for a rival Eastern Conference team,  Adebayo has “superstar” potential.

Scout for a rival East team has told me that Bam has superstar potential. This particular scout does not throw around the term "superstar" loosely. https://t.co/A4dOZVb5rK

Last season, Adebayo averaged 6.9 points, 5.5 rebounds, and 1.5 assists in 19.8 minutes per game. While those numbers don’t necessarily jump off the page, Adebayo shined when he was given larger workloads throughout the season. In the month of February, Adebayo averaged 21.5 minutes per contest and subsequently recorded 9.1 points and 6.9 rebounds per game. That included three double-double performances, two of which came against future playoff teams.

With the 2018-19 NBA season just around the corner, it seems this scout believes Heat fans could be seeing many more strong performances out of the second-year pro.

Hopefully Adebayo lives up to the expectation.
[xyz-ihs snippet=”HN-300×250-TextnImage”]