Breakdown of the 2012-13 Roster for the Miami Heat 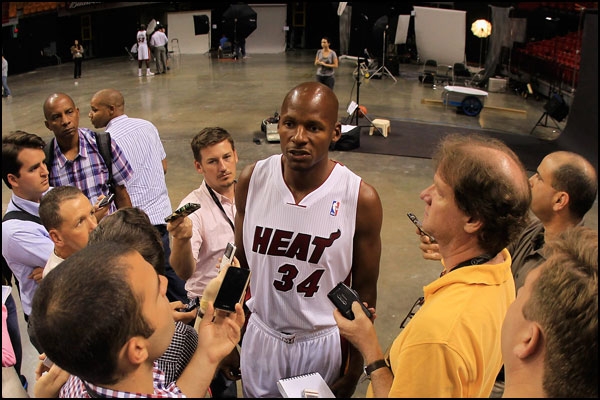 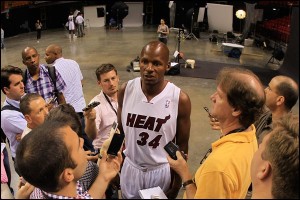 Photo by Chris Trotman: After passing Reggie Miller for the most three pointers of any player in NBA history, Ray Allen made headlines by making the move from Boston to South Beach and becoming a cornerstone in the Heat’s backcourt.

With the countdown to tip-off less than three days away, the defending NBA champion Miami Heat have made some moves to complete their roster before they host the Boston Celtics on Tuesday, October, 30.

Over the final weekend before the start of the 2012-13 season, the Heat released Rodney Carney and Garrett Temple to complete their 15-man roster.   Guard Terrell Harris, who spent last year as a reserve for the Heat, beat out Temple for the last remaining spot. Harris, a 6-foot-4 guard from Oklahoma State, averaged 5.3 points and 1.6 assists per game in seven appearances in Miami’s 2012 preseason games.

Newcomers Rashard Lewis, Josh Harrellson, and Ray Allen are sure to boost the outside shooting, but let’s take a closer look and breakdown of what each player can contribute to the Heat this season.

After passing Reggie Miller for the most three pointers of any player in NBA history, Ray Allen made headlines by making the move from Boston to South Beach and becoming a cornerstone in the Heat’s backcourt.  Last season Allen averaged 10.7 points per game for the Celtics, but fell short to Miami in game seven of the Eastern Conference Championship.  He brings a new dimension to an often lackluster offensive attack that usually consists of pick-and-rolls and the ability of players like LeBron James and Dwyane Wade to beat their man off the dribble.  Allen will run back and forth across the baseline, behind down screens from post players in order to spot up for a quick shot with his picture perfect release. Without question, he is the most exciting addition to Miami, and his presence on the court and ability to shoot, strikes fear into opposing defenses.  Allen will help open lanes up and prevent double teams on the “Big Three” as the expectations for greatness will continue.

Josh Harrellson is a true center who can drift to the outside and knock down a jumper consistently.  Harrellson spent his rookie season last year with the New York Knicks, averaging 4.4 points and 3.9 rebounds per game in limited action.  Outdoing superstar teammate Carmelo Anthony, Harrellson shot 34 percent from three point range, and will see more minutes for the Heat especially against teams like Indiana, Philadelphia, Brooklyn and both Los Angeles teams, all of which have great players at the center spot.

Rashard Lewis spent last season with the struggling Washington Wizards and his play mimicked that of his former team.  At 6-foot-10, Lewis is known for his shooting ability but shot a dismal 24 percent from three point range and only averaged 7.8 points per game.  Looking to bounce back, playing alongside attackers like LeBron and Dwyane, Lewis will see open looks in his playing time with Miami and will compete with James Jones for those last reserve minutes.

Starting point guard Mario Chalmers has been looked down upon as the “little brother” for the past two seasons, but is one of the more clutch shooters on the roster.  Super Mario averaged 9.8 points per game and shot 38.8% from three point range, trailing only James Jones and Mike Miller.  The knock on Chalmers has always been a liability on the defensive side of the ball against athletic point guards like Rajon Rondo, Russell Westbrook and Derrick Rose.  He might also lose some minutes due to the emergence of Norris Cole.

In his second year out of Cleveland State University, Cole was a diamond in the rough, averaging 6.8 points and 2.0 assists per game as a rookie last year.  He has obviously worked on his spot-up shooting over the summer and his three-point percentage and decision making has been impressive in the preseason. Cole has the determination and athleticism to play great defense on the perimeter and should see his minutes continue to climb.

Dwyane Wade now 30, is coming off of knee surgery and his ability to stay healthy and be the second option in the offensive attack will once again be expected.  Wade averaged 22.1 points per game last season and also has become the team’s closer in the final minutes. Without a healthy Wade, it will be difficult for Miami to survive seven game series in the playoffs against formidable opponents.

A three-time NCAA defensive player of the year at Duke University, veteran forward Shane Battier does all the little things for the team and is a consistent shooter.  Battier averaged only 4.8 points per game last season but upped that total to 7.0 in the postseason after earning a starting spot.  Battier is a versatile defender who can guard players like Kobe Bryant on the wing, as well as forwards like Amar’e Stoudemire.  He has become a starter in the “position-less” Miami team and will be alongside James and Bosh in the front court.  Battier’s intangibles as a competitor and leader far outweigh his talents on the court but none the less, are vital to this team’s success.

After flirting with the thought of retirement, Mike Miller decided playing for a chance to repeat as an NBA Champion was too good to pass on.  Or maybe it was the 18.8 million remaining on his final three years under contract.  Whichever the case, Miller led the team in three-point shooting, connecting on a remarkable 45.3 percent of shots from deep.  Shockingly, he shot better from beyond the arc then from within, but he is vital to spreading the floor and creating open lanes to attack.  He also is a scrappy player, willing to dive on lose balls, throw his weight around on help defense in the paint and is an excellent rebounder from the guard position.  Miller will split time with Ray Allen and that should aid in keeping him healthier this year.

Other than Dwyane Wade, Udonis Haslem is the only player from both the 2006 and 2012 Miami Championship teams.  Haslem averaged 6.0 points and 7.3 rebounds per game last season and is a reliable shooter on pick-and-pop situations.  He is a very unselfish player with a high motor and is one of the best rebounders on the team, flourishing down low with the second unit.

Joel Anthony gets playing time for one reason, relentless defense in the paint.  Anthony is undersized at 6-foot-9, but makes up for it with his strength, positioning and well-timed leaping ability. Anthony led the team with 1.3 blocks per game and averages more rebounds than points per game. However, in 21.1 minutes per game last season, he only averaged 3.9 rebounds and if he wants to continue to see playing time he will have to put forth more effort on the glass.

James Jones is often overlooked, but the 2011 Three-Point Shootout Champion knows his role when Coach Erik Spoelstra signals to him on the bench.  Jones is a spot up shooter, who shot 40.4 percent from deep last year and without warming up, will be asked to knock down the shot when the team trails late in games.

Chris Bosh is having the most impressive preseason of any player on the roster, and in also adjusting to being the sole post player in the starting lineup.  Bosh, averaged 18.0 points and 7.9 rebounds per game but he will need to work on being more physical on the offensive and defensive glass, and be willing to grind with bigger centers on the defensive side of the ball.  With his impressive footwork in the post and ability to be a reliable mid-range shooter in pick-and-pop plays, Bosh is the wildcard for Miami, and will need to ride the confidence he possessed in the preseason for the rest of the year.

In an interview with the Associated Press, three-time NBA regular season MVP Lebron James was asked about his future goals.

“I want to be the best of all-time, it’s that simple,” James said.

The success of James will be the key for Miami to repeat as champions.  We all know what he can do on offense, averaging 27.1 points, 7.9 rebounds and 6.2 assists per game last season, but the effort to defend every position and facilitate to open teammates will also be crucial. James led the team in points, rebounds, assists, steals, and minutes per game.  With key additions like Ray Allen and Rashad Lewis who are sure to knock down open shots, even Duke Coach Mike Krzyzewski expects LeBron to have a 20-assist game this year.  If there is any room for improvement, as hard as it is to point out in his game, James’ ability to bring up his free throw percentage from 77 percent to 80 percent or above, could be the difference between winning and losing close games.  Simply put, don’t let off the gas LeBron.

Regardless if their players are the league MVP, the greatest three-point shooter of all-time or a two-time NBA Champion, unselfish team play on both offense and defense will be essential for the Heat to continue their run and advance to their third straight NBA Finals in 2013.