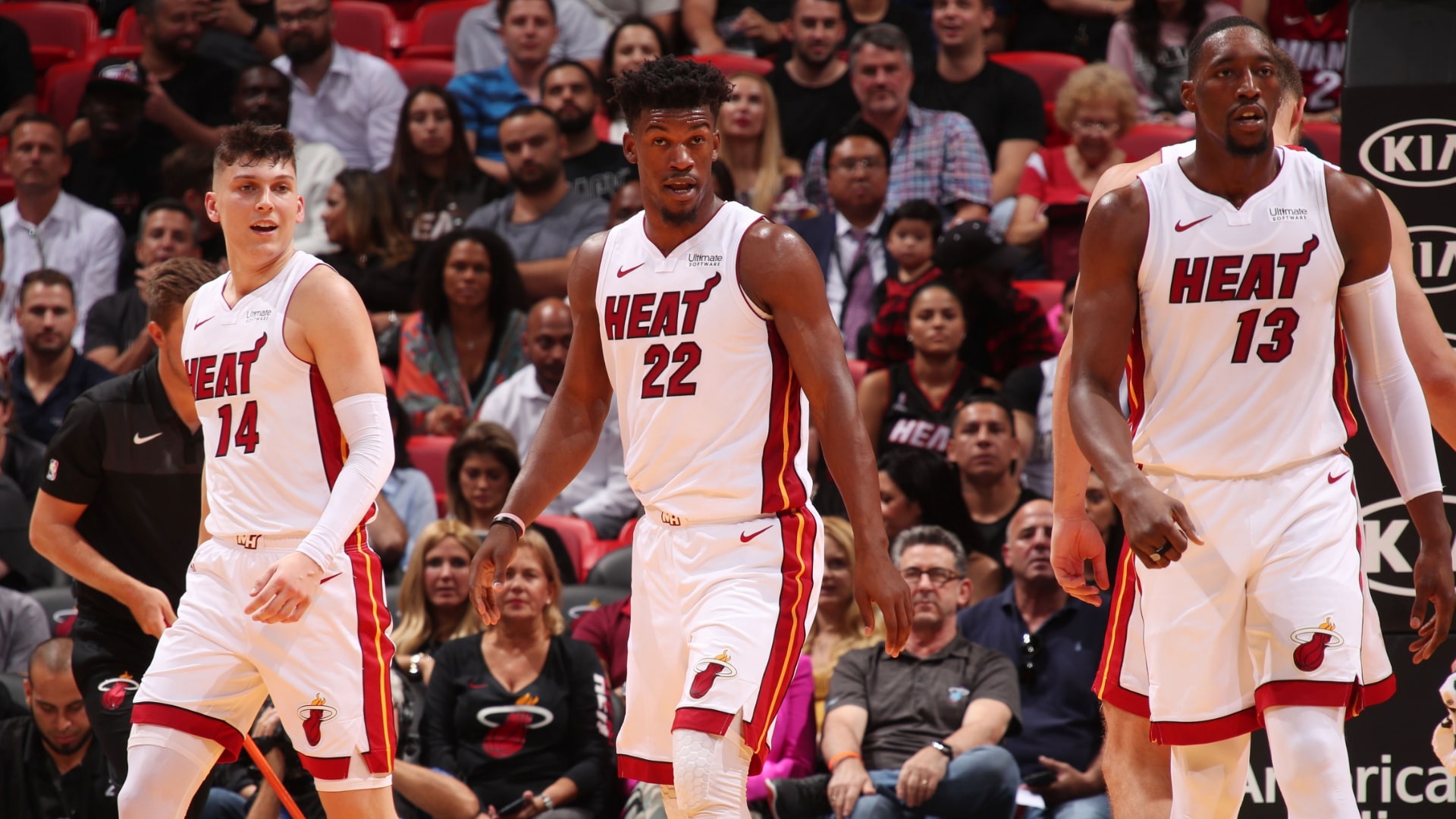 The Miami Heat have only gone 2-2 in their regular games inside the NBA’s bubble, but they are primed to go deep into the playoffs.

In fact, the Heat may be one of the most well-prepared teams to actually represent the Eastern Conference in the 2020 NBA Finals.

While that may be hard to believe given the fact that they are currently the No. 4 seed in the conference, there are a number of convincing reasons why the Heat are a very real threat to contend for the title this season.

Here are the top five reasons why the Heat are primed to represent the East in the 2020 NBA Finals. 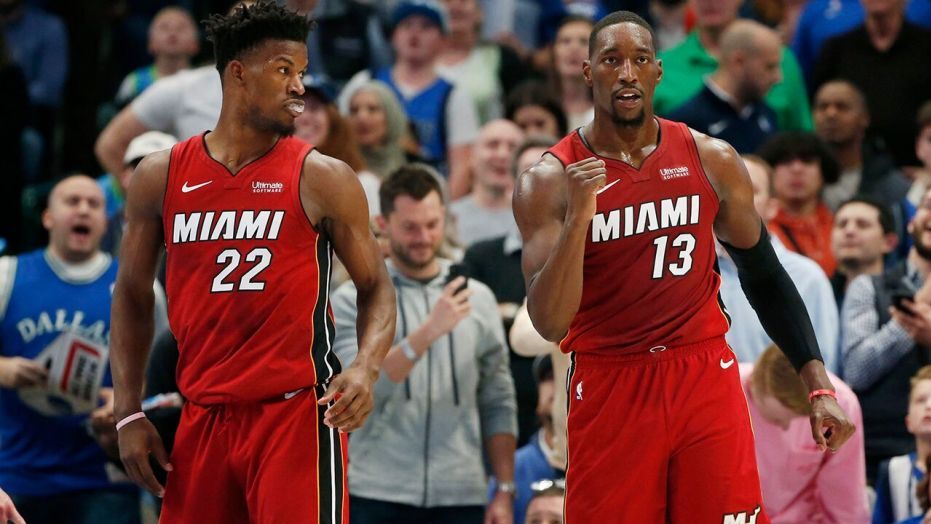 If fans know one thing about the NBA playoffs, it’s that star power matters quite a lot. Thanks to the addition of All-Star Jimmy Butler last summer and the ascension of newly minted All-Star Bam Adebayo this season, the Heat are now packed with more star power than they’ve had since the Big 3 era.

Butler has shone in his first season with the Heat. So far this season, he is averaging 20.2 points, 6.6 rebounds, 6.1 assists and 1.7 steals per game. He has continued to prove why he deserves the reputation as one of the best two-way stars in the league.

Butler proved his worth in last year’s playoffs as a member of the Philadelphia 76ers. In a conference semifinal series against the eventual NBA champion Toronto Raptors, Butler averaged 22.0 points, 7.0 rebounds, 5.6 assists and 1.0 steal per game. Fans can expect him to perform at a similar level in his first playoff run with the Heat.

As for Adebayo, the surging youngster has a lot to prove in this season’s playoffs. So far this season, he’s averaging 16.1 points, 10.4 rebounds and 5.1 assists per game.

Through the first four regular season games inside the bubble, Adebayo has scored at least 20 points twice. If he can take his scoring to the next level on a nightly basis, the Heat will be very tough for opposing teams to overcome.

Beyond that, Adebayo has proven the ability to contend with some of the more dominant big men in the conference. That fact will absolutely come in handy if the Heat have to battle with teams like the Milwaukee Bucks, 76ers or Raptors in this year’s postseason. 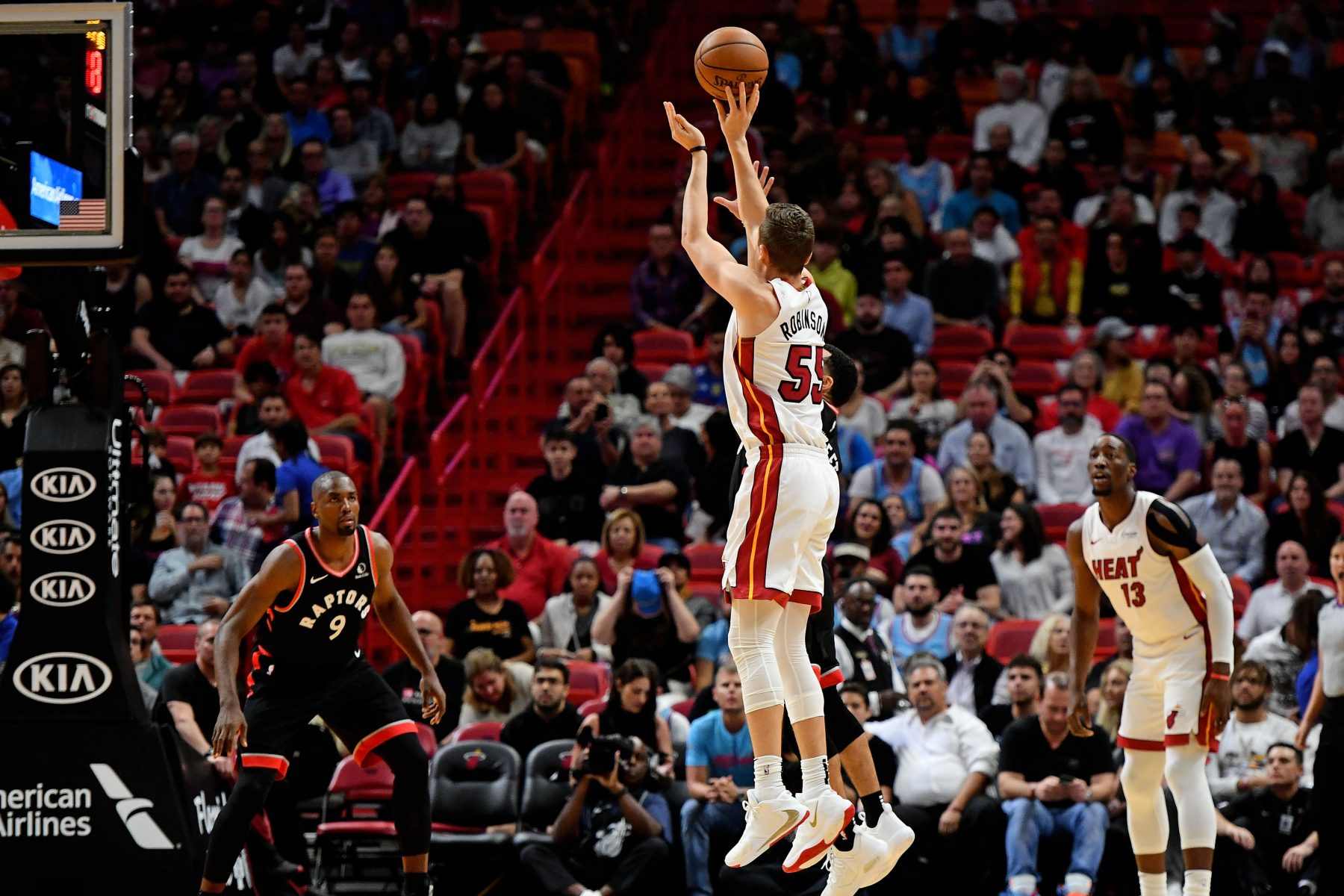 It’s no secret that the Heat have been incredibly dangerous from deep this season. In fact, they’re the best shooting team from deep with just a handful of regular seasons games left on the schedule.

So far this year, Miami is averaging 38.3 percent from deep. That high percentage is primarily thanks to players like Duncan Robinson, Tyler Herro, Kelly Olynyk, Jae Crowder, Kendrick Nunn and Goran Dragic. All players are averaging 35.6 percent shooting from deep or above.

Robinson is without a doubt the team’s most potent shooter.

Dragic, tonight, on Duncan Robinson: "He's the best shooter in the league."

While neither Adebayo nor Butler are potent from three, they have tons of options to go to with when it comes to kicking the ball outside for an open shot.

The three-point shot has never been more important in the NBA than it is right now. Its importance will continue in the playoffs and will surely be a deciding factor in a number of playoff games. 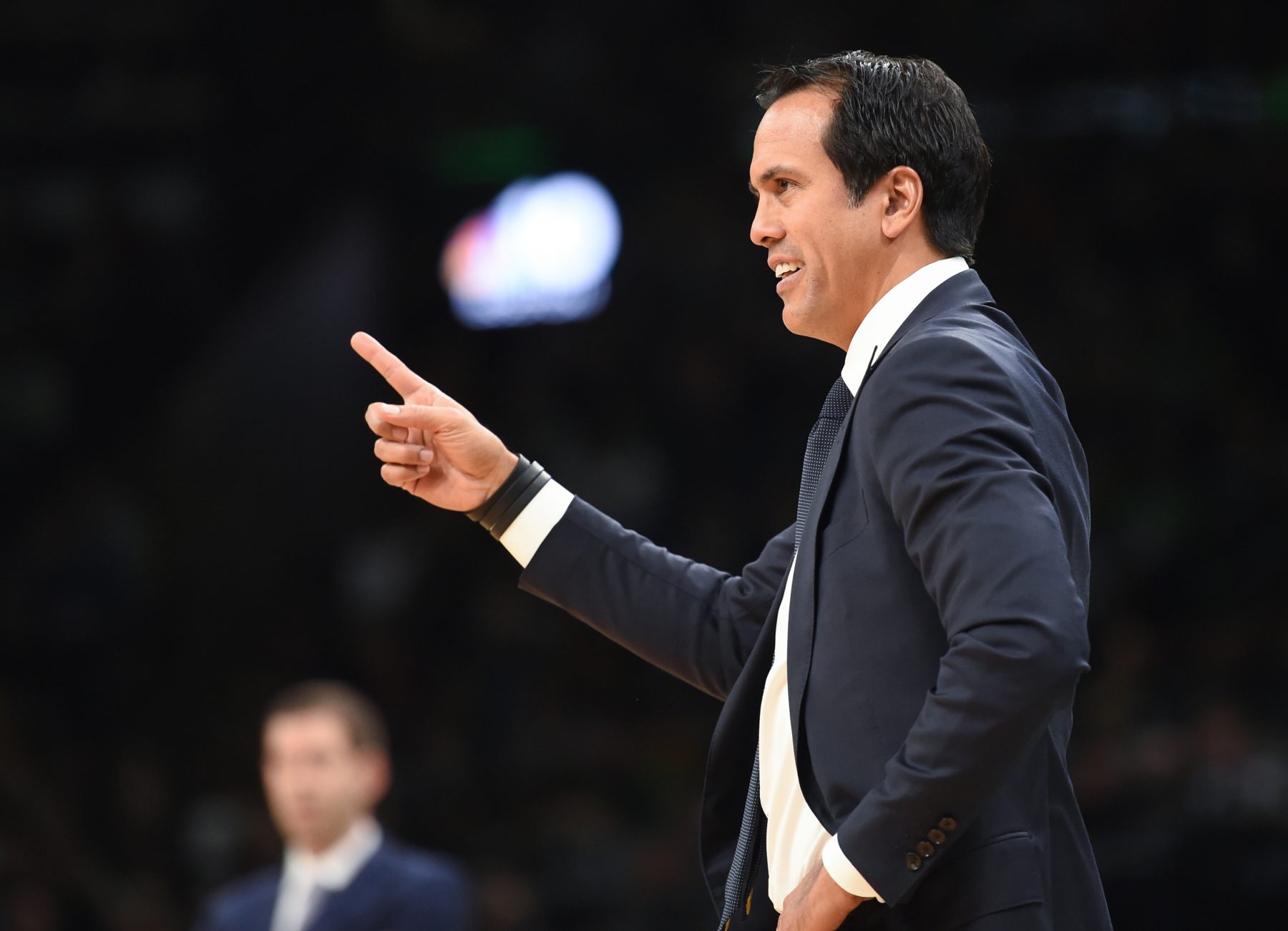 If you don’t think Heat head coach Erik Spoelstra is one of the best coaches in the Eastern Conference, then you’re just flat wrong.

Ever since taking over the job over a decade ago, Spoelstra has continued to prove that he is able to make the very most out of the players that he has on his roster. He’s a powerful and level-headed leader, and it always seems as though his players simply love to play for him.

Beyond that, he has immense championship pedigree. He’s been a head coach in four NBA Finals series and has won two championships. He knows exactly what it takes to lead a team to the promised land and no moment is too big for the veteran coach.

He’s got a winning percentage of 60.2 percent in the playoffs across his career. Surely, that fact has him well prepared for what lies ahead for his squad.

The Heat have winning records against every team on that list this season with the exception of the Celtics.

In fact, the Heat did not lose to the Bucks or Raptors until the 2019-20 resumed inside the NBA bubble. Even then, the Raptors needed some questionable help from the officiating crew to beat the Heat inside the bubble.

In the loss to the Bucks, Miami was without both Butler and Dragic.

Without a doubt, the Heat have proven that they can match up well with and defeat the top teams in the conference.

Considering their winning records against all but one of the teams at the top of the East, their chances of winning seven-game series in the playoffs should be quite favorable. 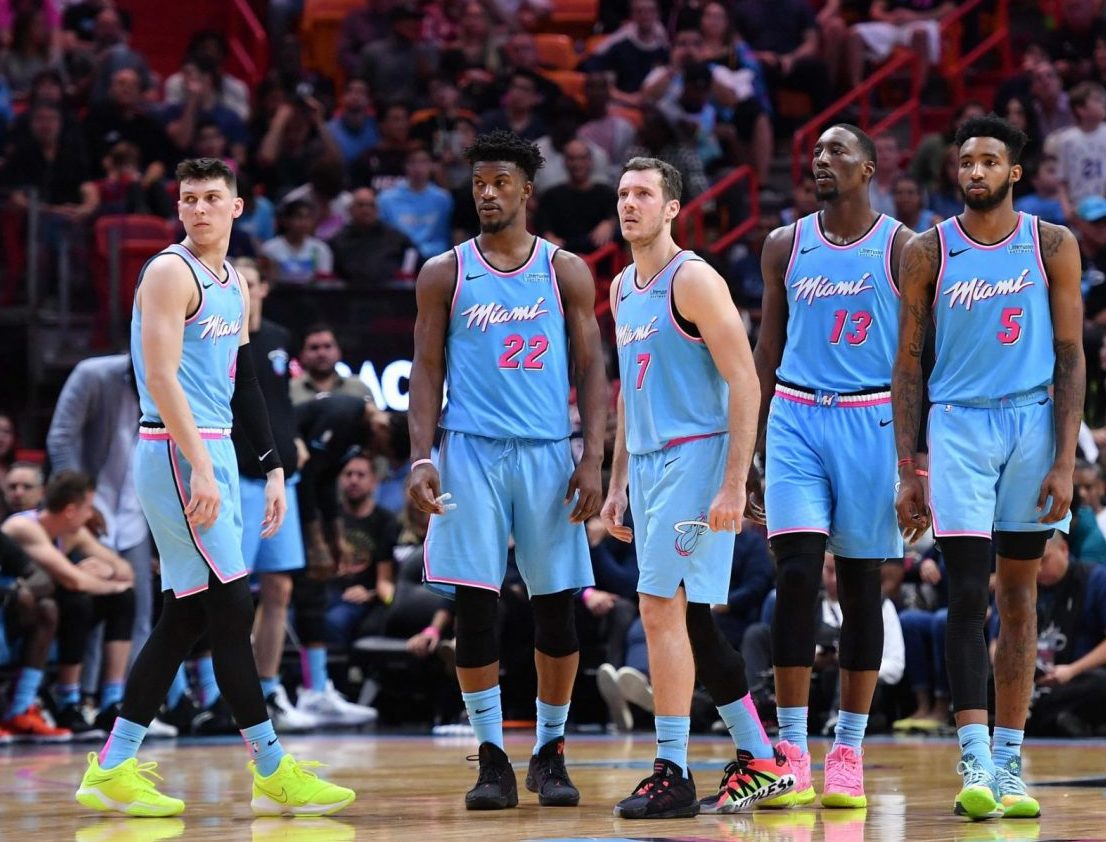 For years, the Heat’s leadership of Spoelstra and team president Pat Riley has been applauded for creating one of the strongest team cultures in the entire NBA.

From star players to youngsters learning on the bench, players on the Heat almost always practice and preach team-first mentalities. The willingness for players to put team success over individual recognition could play a huge role in this season’s playoffs.

While the Heat may not be the most talented team in the East, they are willing to sacrifice in order to gain collective success.

“For me, it’s different types of games. I think I have a different mindset just knowing what the team needs,” Iguodala said. “Just trying to play winning basketball and then understanding that something that may not reflect the contribution on the stat sheet and being comfortable with that.

“We tend to look at the stat sheet too much to determine whether guys had a good game or not. For me, it’s just trying to fill the void.”

Surely, Iguodala is far from the only Heat player to share that exact sentiment.

The Heat’s vaunted culture and all of the reasons previously mentioned in this list makes Miami perfectly primed to represent the East in the 2020 NBA Finals.