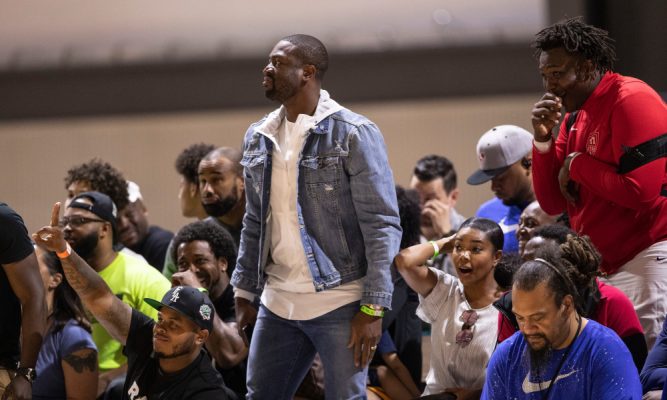 While Miami Heat veteran guard Dwayne Wade is closing out his 16-year NBA career this season, the continuing ascent of his son, Zaire, is taking place on high school basketball courts across South Florida.

The latest evidence of the younger Wade’s developing talent came in front of his family as he offered a thundering left-handed dunk for all to enjoy.

Zaire turns 17 years of age on Feb. 4, but he’s continuing to have an impact while playing for American Heritage High School in Plantation. The 6-foot-2 junior is hoping to play a major role in helping Heritage go farther than the state regional quarterfinals that they reached last season.

Despite the fact that he doesn’t graduate from high school until next year, Zaire has already received a scholarship offer from the University of Nebraska. That happens to be the alma mater of his stepmother, Gabrielle Union, though he apparently is drawing interest from other Division I schools as well. That list of possible destinations figures to grow as he continues to show off his talents, with a final decision likely expected by the end of the year.

Zaire’s father will have much more time on his hands to both advise him and offer instruction next season, given his pending retirement. While there have been some who suggest that the elder Wade still has years left to play in the NBA, he’s offering no indication that he’s rethinking his decision.
[xyz-ihs snippet=”HN-300×250-TextnImage”]