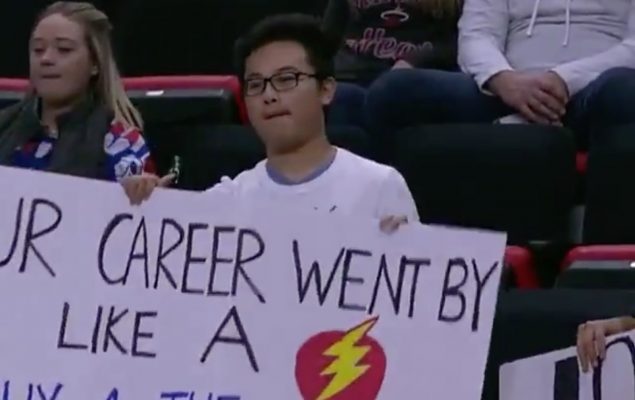 Miami Heat guard Dwyane Wade is in the early stages of his 16th and final NBA season, with plenty of tributes to follow.

Fans are also joining in on what’s been dubbed “One Last Dance,” with the most recent being a Heat fan in Detroit during Monday night’s game against the Pistons.

The 36-year-old Wade announced just prior to the start of the Heat’s training camp in September that the 2018-19 campaign would be his last. He’s spent the bulk of his career with the Heat after having been their top selection in the 2003 draft.

Over the course of those years, Wade has established himself as not only a Heat legend, but a future Hall of Famer as well. He’s also been a central figure in the franchise’s three league titles.

While Wade is a native of Chicago, he’s carved out an indelible spot in Miami that’s often spanned far beyond the basketball court. That’s one reason the push continues to rename Biscayne Boulevard in his honor.

Right now, Wade is more focused on getting the Heat back on track after the team has dropped its last three games prior to tonight’s game against the Pistons.
[xyz-ihs snippet=”HN-300×250-TextnImage”]