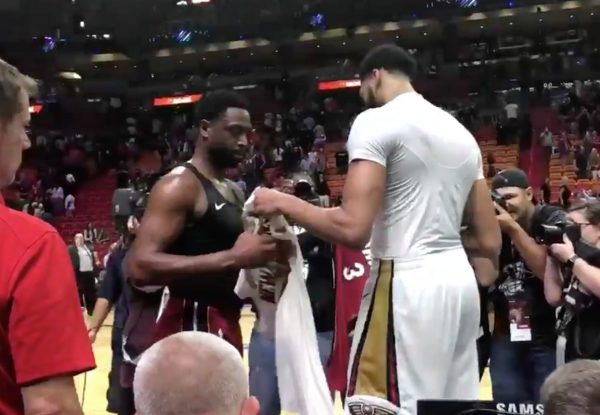 Anthony Davis scrawled a long message to Dwyane Wade before he became the latest the recipient of a Wade jersey in this #onelastdance. pic.twitter.com/t4r81vTBC9

Wade, who is in his 16th and final year in the NBA, prepared for this season by singling out individuals from teams around the league that he has “a relationship with.” He has then signed a jersey and exchanged it with those individuals.

It’s all part of the “One Last Dance” celebration of Wade’s storied career, which has included three championships and a Finals MVP.

Wade finished Friday night’s contest with 18 points and six assists in 27 quality minutes off the bench. Davis, meanwhile, led the Pelicans with 41 points and nine rebounds, but he did not receive enough help from his team to seal the victory.
[xyz-ihs snippet=”HN-300×250-TextnImage”]