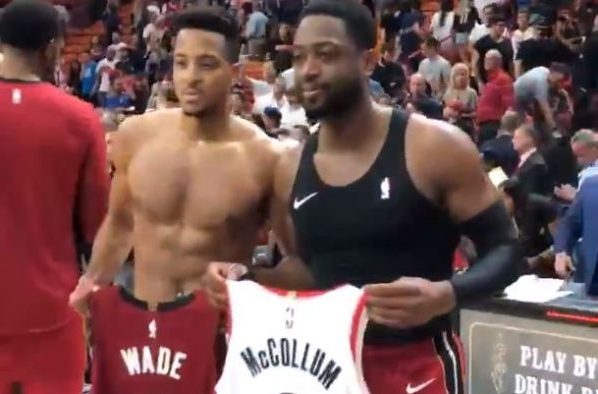 Despite the appearance of spontaneity, Miami Heat guard Dwyane Wade‘s habit of exchanging jerseys with fellow NBA players during his final season has a level of strategy attached to the process.

Ira Winderman of the Sun Sentinel looked at the situation, which began after Wade announced that the 2018-19 campaign would be his last.

“I got the schedule, so I know who we’re playing and I know who’s on that team that I have a relationship with,” he said. “Then I go to them before the game or they come to me.”

The first of the jersey giveaways came following the opening game of the regular season against the Orlando Magic. That was when he gave Magic center Nikola Vucevic a signed Heat jersey.

That was followed by an exchange with Sacramento’s Iman Shumpert, who was his teammate in Cleveland last year. Last Saturday, Wade and Portland guard CJ McCollum made their trade.

Wade’s enduring popularity around the league has meant that the Heat have always had plenty of the 16-year veteran’s jerseys available. However, before the season began, Wade spoke with team officials about the situation:

“There was a conversation before the season started. I have a whole list, for the entire season.”

Unlike the planning involved with jerseys, no such strategy exists when it comes to potentially taking games off to rest:

“I’m just playing. I haven’t needed to sit out back-to-backs in a long time. So it’s not in the conversation.”