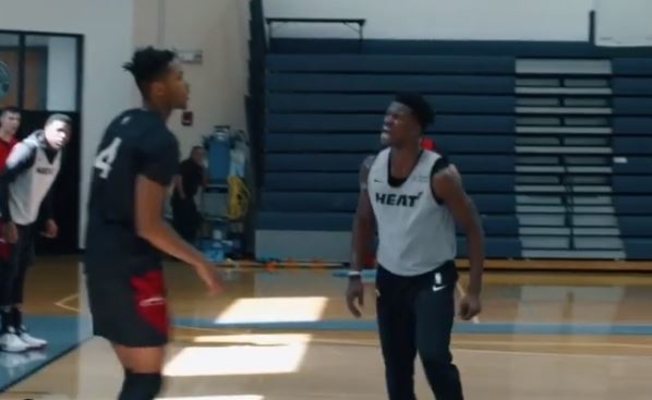 Jimmy Butler is never one to hold his tongue, and when he blocked rookie KZ Okpala underneath the basket during a recent Miami Heat scrimmage, the four-time All-Star let the trash talk flow.

? @jimmybutler has something to say! #NSFW

Butler was playing fantastic defense during a two-on-one situation in the video, as he is known as one of the best two-way players in the game.

What’s equally important to note is that he likely offered Okpala his biggest “welcome to the NBA” moment so far in his young career. Butler was brought to Miami to not only change things on the court, but off the court as well. It’s this kind of intensity that the Heat front office hoped for.

Since arriving in Miami, Butler has already proven his massive impact on the team. From arriving at the Heat’s facilities before dawn to get his first workout in, to having hilarious conversations with fans, there’s no doubt that team president Pat Riley is getting a great initial return on investment.

In this most recent instance, it looks like Butler is not holding back when it comes to his infamous competitiveness. While it is likely something Okpala has not come across as of yet, it will certainly harden him and prepare him for the competition to come.

As for Butler, he just needs to make sure to maintain this kind of drive through the 2019-20 season and beyond. Though, given everything there is to know about the star player, that likely won’t be much of a concern anytime soon.