Video: Goran Dragic Discusses Being on Team LeBron and His First All-Star Experience 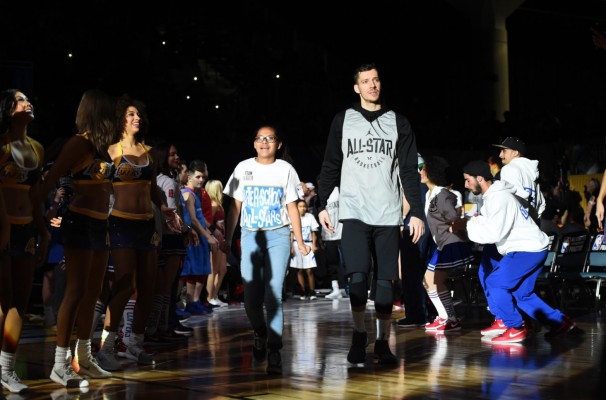 Miami Heat point guard Goran Dragic is an All-Star for the first time in his NBA career and he is most certainly enjoying the experience in Los Angeles.

Goran Dragic on his experience at his first All-Star game and practicing with Team LeBron pic.twitter.com/nDmsr1pXdO

“This is something new to me and my family but we want to enjoy every moment, it’s fun,” said Dragic.

Dragic replaced Cleveland Cavaliers forward Kevin Love on Team LeBron after Love had suffered a fractured bone in his left hand, which forced him to withdraw from the game. So far this season Dragic is averaging 17.4 points and 4.7 assists per game, both of which lead the Heat. He is also adding 4.0 rebounds per game.

Dragic also talked about what it was like to be on Team LeBron:

“You know for me, I know a couple of guys and have already talked with them. Usually when you play against, let’s say LeBron [James] or [Russell] Westbrook, you don’t exchange a lot of words, you don’t know them personally,” said Dragic. “But now in the locker room, we did talk a little bit and it’s really fascinating how good guys they are and you kind of know the different side of them, not only the basketball player, but as a human being, so that’s really important and it’s really fun.”

This is the first time a Heat player will participate in the All-Star game since Dwyane Wade in 2016.

In the three and a half seasons that he has spent with the Heat since being acquired from the Phoenix Suns, Dragic has averaged 17.2 points, 3.8 rebounds, 5.5 assists and 1.0 steals per game.