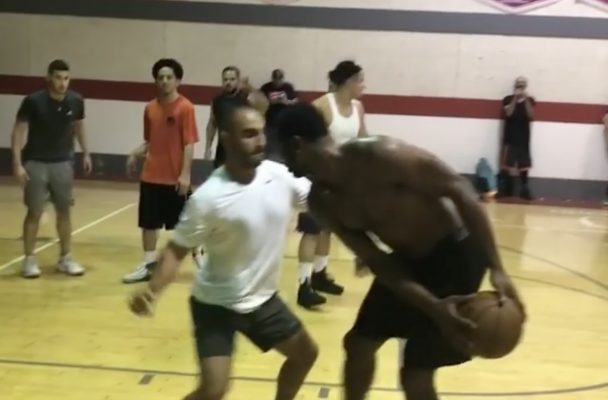 You know how there are times when you go to the local gym for pickup basketball and there’s that one guy who doesn’t look like much but then he surprises everybody with the strength of his game?

This isn’t one of those stories.

Future NBA Hall of Famer Dwyane Wade made an appearance at a local pickup game in Los Angeles after a workout. One look and and it was clear he was going to dominate…which he did.

Determined defenders were unable to keep Wade from driving to the rim and dunking:

Alil fun with a few of the local hoopers after my workout tonite ??. When you love the game you will play it anywhere on God’s green earth. Within reason that is.

Wade was able to get to the paint with ease:

And he was able to get his shot off without any difficulty:

Wade, 36, is still mulling whether or not to play a 16th NBA season. A report last week citing a source who has spoken to Wade claims he is inclined to return. He has said that if he does come back it will be only with the Miami Heat, the team he spent 13 years with before leaving to sign with Chicago in 2016. He returned to the Heat last season for 21 games after starting the season in Cleveland, and averaged 16.6 points per game in Miami’s five-game playoff loss to Philadelphia.

Based on his run at the gym, Wade looks ready for another year in the NBA.
[xyz-ihs snippet=”HN-300×250-TextnImage”]