Video: Dwyane Wade Balls Out in Pickup Game With His Son 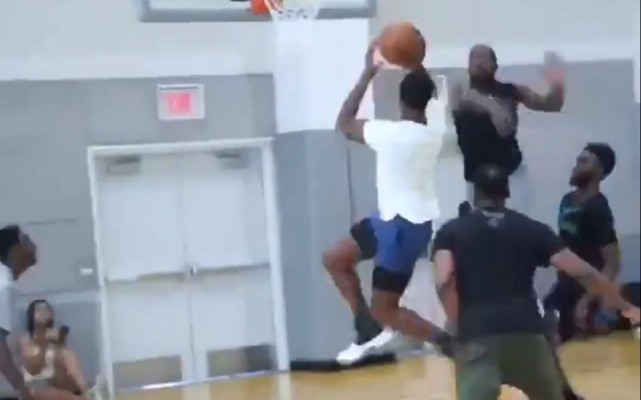 From vacationing in Europe to conducting business trips in China, the 36-year-old has been busy. Yet, the veteran is finding time to hoop, and lately, he’s been doing it with his son. In the video below, you can see father Wade and son, Zaire Wade, balling together:

Although Dwyane Wade is pondering retirement, you can see how productive the three-time champion can still be on the floor. Last season, the guard put up 12.0 points and 3.4 rebounds in 21 regular season games with the Heat. However, in the playoffs, he was the Heat’s second leading scorer behind Goran Dragic with 16.6 points a contest. In the disappointing five-game series against the Philadelphia 76ers, “Flash” led the Heat to their only win, scoring 28 points and collecting seven rebounds on a stellar 68 percent shooting from the field.

While the Heat don’t need the 15-year pro to do all the heavy lifting, they could use his occasional flashback performances and wise experience in the locker room. Still, it’ll be hard to convince the fantastic father as he said family will be the determining factor in his retirement decision. The other Wade in the video, Zaire, is going into his junior year of high school and is expected to be pitched with scholarship offers from prestigious schools in the next year. The 6-foot-2 point guard has dynamic handles, good IQ and can shoot the ball with precision.

Dwyane Wade is expected to make a decision on his playing future in the next couple of weeks.
[xyz-ihs snippet=”HN-300×250-TextnImage”]