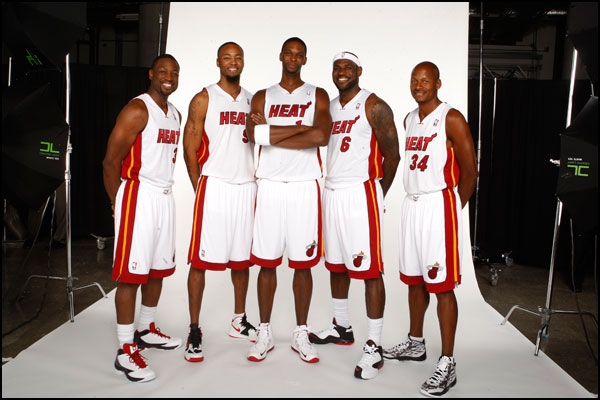 Photo by: Chris Trotman, "With the addition of Ray Allen, the greatest three point shooter of all-time, as well as a versatile shooter in Rashard Lewis among others, the Heat are poised to ride the coattails of their superhero’s cape to another title run."

The Miami Heat are embarking on their journey to become the first team to repeat as back-to-back NBA Champions since the Los Angeles Lakers. With the pre-season just days away, the Miami Heat have assembled their familiar and new parts to the championship puzzle in time for training camp.  With the addition of Ray Allen, the greatest three point shooter of all-time, as well as a versatile shooter in Rashard Lewis among others, the Heat are poised to ride the coattails of their superhero’s cape to another title run.

Lebron James finished his 2012 campaign as the regular season MVP, Olympic Gold Medalist and most importantly, NBA Finals champion and MVP.  But he isn’t finished yet.  “I’ve accomplished a lot of things, a lot of goals, but I’m not satisfied with that,” said James during the Heat press conference on Friday September 28.  “But I’ll continue to get better, continue to lead this team the best way I know how, continue to add more pieces to my game.”  James was successful in the playoffs at the power forward position after Chris Bosh went out with an abdominal injury, and has provided the Heat with an intriguing roster matchup.   Although undersized, Bosh will be starting at center, with James at the power forward instead of the small forward, and will still carry out the duties as Miami’s “point forward.”  A role popularized by Scottie Pippen of the Chicago Bulls, a point forward entails running the offense as a true point guard would, while guarding a post player on defense.  This new roster tweak worked wonders for the Heat in the NBA Finals, and Coach Erik Spoelstra will continue to use it this season.

As for some of the other players, the Heat currently have a roster set at 18, which will need to be trimmed down to the maximum of 15 signed players by the start of the  2012-2013 NBA season. During the season, only 12 players are allowed to be dressed in uniform and three will be used as injury reserves.  Simply put, three players will be cut from the roster.  One of those players competing for a spot is center Josh Harrellson, who spent his rookie season last year with the New York Knicks.  Although not your average center, Harrellson is a versatile big man who managed to shoot 34 percent from three point range as well as grab four rebounds a game in the 2011-2012 NBA season.  Harrellson signed a one-year deal and is hoping to be a true backup to the Heat’s new starting center, Chris Bosh.

For a 6-foot-10, 275-pound center who will be asked to get nasty in the paint with players like Dwight Howard and Andrew Bynum, the luxury of his ability to drift outside and knock down an open shot will provide the Heat offense with even more firepower.  Harrellson would be utilized similarly to James’ former Cleveland and Miami teammate Zydrunas Ilgauskas, who for his career averaged 13.0 points per game and shot 31 percent from beyond the arc.

In addition, Dwyane Wade, 30, is coming off of left knee surgery that kept him off of the 2012 Olympic roster and is still questionable to return by the season opener against the Boston Celtics on October 30th.  Ultimately, surrounding James and Wade with the likes of Ray Allen, Mike Miller, Shane Battier, Rashard Lewis and now Josh Harrellson would make the double-teaming of James a gamble, to say the least.  With James proving in the 2012 playoffs that he can be effective as a low post scorer, a double team would result in a kick out pass to a wide-open deadly shooter.  With reliable shooters in the mix, the offense can space the floor allowing lanes to open up for attackers like James and Wade when the defense is worrying about the kick out pass as much as the drive itself.  Presenting defenses with the “pick your poison” dilemma is what coaches dream about. Coaches have always been fascinated with the idea that regardless of whom a defense focuses on, they can still be an effective and prolific offense.

The next step will be to work on the chemistry and spacing needed with this combination of shooters and attackers.  Despite their efforts to prove otherwise, one thing is for certain, opposing defenses will not be looking forward to their matchup against the Heat offense.  The team will travel to Atlanta to open their pre-season against the Hawks on October 7, and will also fly out to China for two exhibition games against the Clippers.

If the Heatles want to “ReHeat” and successfully repeat as NBA Champions, they will need to be more efficient and cut down on their turnovers.  They finished 24th in the league in turnovers last year and often times let teams back into games because of sloppy play.  On the contrary, their ability to force turnovers and turn their opposition’s mistake into a highlight reel alley-oop in transition is one of the strongest points of this unit.

They say the first one is always the hardest to get, but then again repeating the same success year after year is the key to unlock a dynasty.