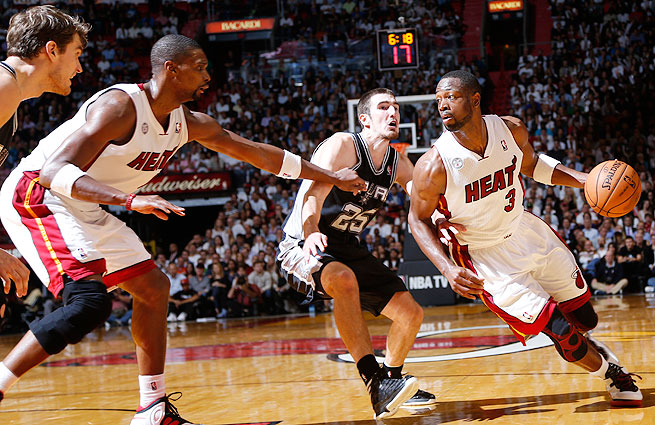 Before the start of every home game, Dwyane Wade does his best to get the home crowd roaring.  He ceremoniously runs to each corner of the court and raises his hands to the rafters.  It’s his way of telling Heat Nation to stand up and get ready for battle.  As the hometown hero and arguably the most beloved player in Miami’s “Wade County”, it makes perfect sense that he’s the one to ignite the fans.

In the Game 1 of the NBA Finals on Thursday night, Wade fed off the crowd’s energy and flashed the brilliance that has coined him one of the best two-guards in the league.  He opened the game with a dunk and then went on to score 13 of his 17 points in the first half. He had that extra pep in his step that Heat fans have grown so accustomed to seeing.

But despite the on court exuberance and the spark of energy that he started the game with, the Heat still suffered a 92-88 loss to the fine-tuned and well-rested San Antonio Spurs.  Wade had just four points in the second half, failed to crash the boards, and didn’t have a tremendous impact on the game when it mattered most.  He didn’t score a single point in the critical final period.  Wade blamed his tired legs for his sluggish finish. 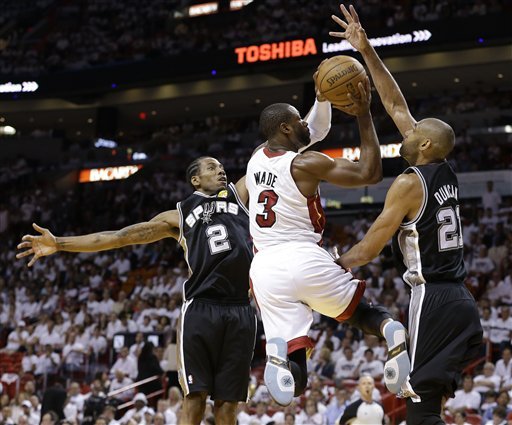 Image via Yahoo Sports — “Dwyane Wade was stifled by the San Antonio defense in Game 1 of the Finals.”

“I thought we were a little fatigued, you know, honestly,” said Wade.  “We looked like a team that came off a 7 game series.”

To be fair to Wade, the rest of his team didn’t perform exceptionally well down the stretch either.  There’s no doubt that the stat-sheet lovers will point to the fact that LeBron James finished the game with 18 points, 18 rebounds and 10 assists – becoming only the 5th player in NBA history to have at least a 15-15-10 line in the Finals.  While James had a stellar all around game, he wasn’t the dominant, efficient superstar that we are so accustomed to seeing.  In fact, he shot only 7-of-16 against the sneaky strength and outstretched arms of Spurs wing man Kawhi Leonard.  No matter which way you dissect it, that’s 18 points on 16 shot attempts.

Meanwhile Chris Bosh, the other member of “The Big Three”, played more like a poorly used shooting guard than an imposing, talented power forward/center.  The Spurs kept the wiry Bosh out of the paint and he finished with a mediocre 13 points and 5 rebounds on 6-of-16 shooting from the field.  More importantly, Bosh shot 1-of-5 from the field in the critical fourth quarter and bricked a wide open three pointer.  While he was having another forgettable night, his counterpart, Tim “The Big Fundamental” Duncan, was pacing his Spurs with an impressive 20 point, 14 rebound outing.

So now what? After dropping Game 1, the Heat are facing what just may be their biggest challenge in the LeBron/Wade/Bosh era. Yes, they lost Game 1 of the NBA Finals last year in Oklahoma City against Kevin Durant and the Thunder before claiming the NBA Championship. But this year’s Spurs team creates match up problems that the Thunder didn’t.

Last year in the Finals, Durant, Russell Westbrook and the Thunder looked to play up-tempo basketball.  Needless to say, this played right into the Heat’s game plan. It allowed James and Wade to create turnovers and use their athleticism in the open court. Defensively, the Thunder sent double teams at LeBron in the post, which created the spacing needed for the Heat to feed its shooters at the three point line.  When you play a team with such a similar style of play and you have superior talent, you are bound to find a way to win.

On the other hand, the Spurs are a defensive juggernaut that is determined to slow the game down and force the Heat to take contested shots.  With an abundance of long and aggressive defenders, there are less double teams and more crafty defensive schemes. Tim Duncan and Tiago Splitter are able to hold their own inside and wing defenders such as Leonard and Danny Green are free to roam and cause havoc on the perimeter.

Parker echoed their game plan in his post game comments.

“Obviously LeBron is an unbelievable player and Dwayne Wade is unbelievable.  We just tried to contain them, pack the paint and make them take tough shots,” he said.

While the loss may have been shocking to some, the Heat players are no strangers to adversity.  Last year, the Heat needed seven games to get past Paul Pierce, Rajon Rondo and the physical Boston Celtics to secure their ticket to the NBA Finals. That series included a monster performance from James in Game 6 in Boston where he exploded for 45 points and 15 rebounds and concluded with a breakthrough 101-88 victory in the comfort of the American Airlines Arena.

This year, James and company played another rugged seven game series to get to the Finals.  This time it was the young and athletic Indiana Pacers that delayed the Heat’s trip to the doorstep of the promise land.  After a difficult series in which Indiana’s Paul George, Roy Hibbert and David West had their way inside, the Heat pulled through with a huge win in Game 7, stomping the Pacers 99-76.

If history is any indication, the defending champion Heat seem to play their best basketball when their backs are against the wall.  While the stars will have the pressure from the media to perform, role players such as Udonis Haslem, Mike Miller, Mario Chalmers and Ray Allen will also need to be more aggressive and knock down open shots.  This is something that James is well aware of as he prepares for Game 2 on Sunday.

“Against this team you can’t make many mistakes.  The Spurs are the Spurs, they will put you in positions where you feel uncomfortable offensively and defensively,” said James in the post game news conference.  “We hate to lose before we start to get a little edge, but that’s what happens,” he added.

When James and Bosh announced that they were leaving their respective franchises to join Wade and the Miami Heat in the summer of 2010, they celebrated with an electric press conference that resembled the opening of a Beyoncé Knowles concert.  Well, three years later, the lights that they turned on in the American Airlines Arena back then are shining brighter than ever.

The Spurs are paying attention and so is the rest of the world.  It’s time for the Heat to step up and play each and every game like it’s Game 7.

Renaldo is a sports fanatic who is passionate about journalism. After graduating from Florida International University, he has worked for various publications covering a wide range of topics. He currently lives in Miami, FL. "Keep writing, keep living, keep loving"