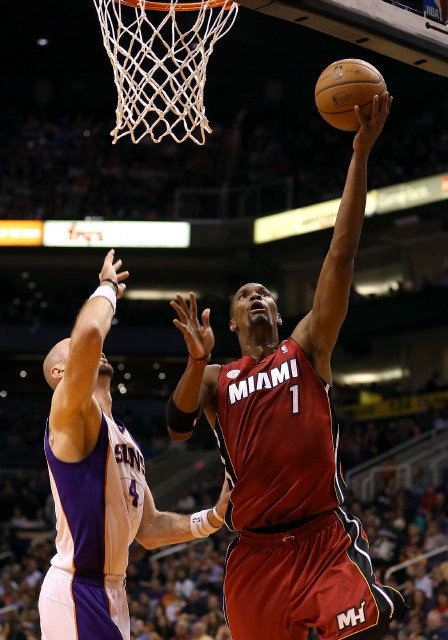 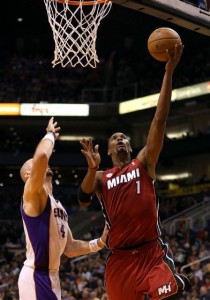 Getty Images, "While there were some shaky moments along the way, the fact that the Heat finished the trip 4-2 and come home with an 8-3 record is enough to qualify as a success."

The Miami Heat just wrapped up a six-game road swing that featured six games in nine days, including matchups against arguably the two tops teams in the Western Conference right now (the Los Angeles Clippers and Memphis Grizzlies) and a difficult back-to-back that saw them arrive in Denver at 5 a.m. the day they were to face the Nuggets.

While there were some shaky moments along the way, the fact that the Heat finished the trip 4-2 and come home with an 8-3 record is enough to qualify as a success.

However, there were reasons for real concern, and we’ll analyze those here while also examining the encouraging developments from the last six games.

Here are three positives and three negatives from the first extended road trip of the year.
Positives

1) No Wade, no problem. Just as they showed last season, the Heat have little trouble finding ways to win – at least in the regular season – without their future Hall of Fame shooting guard, beating the Atlanta Hawks, Denver Nuggets, and Phoenix Suns without Wade in the lineup while he dealt with a foot injury.

Some of that can be attributed to stronger opponents in two of those three games, but it’s worth noting that Heat surrendered 116 points to Denver in its first matchup with Wade playing, and 99 to Phoenix earlier this season, also with Wade in the lineup.

Offensively, the Heat were able to pick up the slack for Wade’s missing 16.9 points per game by surrounding LeBron James and Chris Bosh with an extra shooter – in this case, Mike Miller – and spacing the floor to allow for James to work the middle of the court and kick to shooters when the defense collapses. In the wins over the Suns and Nuggets, the Heat knocked down 21-of-46 (45.6 percent) from long distance.

Miami is now 17-3 the last two seasons without Wade – 16-1 when James plays and Wade doesn’t – and while the Heat will almost certainly need a healthy Wade come playoff time, it’s encouraging to know Miami can survive and even flourish in the regular season when he’s not suited up.

2) Late game resiliency. We’ve seen the Heat have their share of fourth quarter struggles during the past two seasons, but so far this season it appears that post-championship Miami has a new level of comfort late in games.  That fourth quarter mettle was shown in all four wins during the road trip.

Against the Hawks, the Heat railed 87-85 with three minutes to play before finishing the game on a 10-2 run, holding Atlanta to 0-for-4 shooting down the stretch.

In Houston, Miami found itself trailing by eight with just over five minutes left in the fourth quarter, but James scored 11 of his 32 second-half points during the final stretch to help the Heat outscore the Rockets 20-9 to end the game.

Miami didn’t trail in the fourth quarter against the Nuggets but had to fend off several late surges by the home team, with Denver cutting a 13-point lead to one with 1:37 to play.  But the Heat responded by getting stops on three of the last four Nuggets possessions, and got a clutch three-point make by Norris Cole to push the lead to four with 51 seconds left.

The Heat were in a similar circumstance in the final game of the trip against Phoenix, as they saw a 19-point second half lead dissipate in the fourth before turning the Suns away late and scoring the final seven points of a 97-88 victory.

Given those efforts, along with the dramatic fourth-quarter comeback win over Denver earlier in the season, the Heat doesn’t appear at all uncomfortable with late game drama – at least so far.

3) Mike Miller lives. After being used sparingly for much of the early season – Miller only played double digit minutes in two of the first nine games of the season, including two DNPs – the 32-year-old sharpshooter came alive when called into the starting role Thursday and Saturday in Wade’s absence.

Miller played 46 combined minutes against the Suns and Nuggets posting nine and 12 points while making 5-of-11 three-pointers with 10 rebounds, six assists, and just one turnover.  The Heat were +28 over the two games with Miller on the court, and +4 in Miller’s only previous start this year against Atlanta.

With his various physical ailments over the last few seasons and the Heat’s improved depth, it’s clear that coach Erik Spoelstra is content to limit Miller’s minutes during the regular season and preserve his health for the playoffs, but it should be worth exploring whether the Heat would be better off giving Miller more minutes even after Wade’s return, perhaps at the expense of Norris Cole, who so far hasn’t fulfilled much of the promise he displayed during the preseason.

1) Defense is still an issue. Holding opponents below 100 points in four of the games was a step in the right direction, but make no mistake, the Heat coaching staff still has a lot of work to do to get the Miami defense back on track and back in the form we grew accustomed to seeing the past two seasons.

Opponents made 66-of-142 (46.4 percent) from long range during the six-game trip, with the Hawks, Grizzlies, Rockets, and Clippers combining to make 45 from distance in the first four games.  The good news for Miami is that in the last two games against Denver and Phoenix, they only allowed 11 makes on 38 attempts, but it should be noted that the Suns and Nuggets rank just 21st and 26th in the league in three-point shooting.

The Heat’s defensive philosophy on overloading the ball side and funneling everything away from the paint and out to the perimeter naturally leads to a higher than average number of three-point attempts by the opposition.  The Heat gave up the second most three-point makes per game (7.3) in the league during last year’s regular season.

However, Miami clamped down in the playoffs and allowed just 5.6 per game, which offers evidence that some of problem can be assigned to the lack of intensity and effort typically seen in the playoffs that leads to sharper rotations and more contested shots.

But newcomers Ray Allen and Rashard Lewis have both struggled to adapt to the Heat defensive system so far, so while Miami’s track record of turning on the defensive intensity when the games matter most cautions against all-out panic, it’s a situation worth monitoring as the year goes on.

2) Too many turnovers. The Heat entered the road trip averaging only 12.8 turnovers per game, an excellent number that would have them second in the league if that was their current average.  But Miami is currently ninth in the NBA in giveaways after averaging almost 15 per game over the last six, including two 19-turnover games against Phoenix and Denver.

Miami gave up an average of 17.7 points per game off of those turnovers, compared to just 11 points per game through the first five games, and with the current struggles at the defensive end, the Heat need to be limiting the amount of easy points for the opposition to as few as possible.

3) Fourth quarter lapses.  While the Heat’s finishing act in fourth periods has been mostly exemplary, they typically find themselves in need of such strong finishes because of very poor starts to the final quarter.

In five of the six games, the Heat either let a big lead slip away early in the fourth quarter, or let a close game get away from them.  Against the Hawks, Miami led 82-73 with 7:52 left in the game and appeared on the verge of pulling away, but a 14-3 answer by Atlanta put the Heat at an 87-85 deficit just four minutes later.

Despite Memphis’ stellar play through the first three quarters, the Heat still found itself within seven points with 8:33 to play. However, Memphis exploded for a 22-2 run fueled by seven straight misses by Miami and four three-point makes for the Grizzlies.

A similar scenario unfolded in Los Angeles, with Miami trailing by just nine early in the period and within striking distance before the Clippers unleashed an 11-1 run to blow the game open.

After leading by as much as seven in the third quarter against Houston, the Heat found itself down 94-86 in the fourth when the Rockets started the final period with a 7-0 spurt, and a 15-4 Nuggets run to start the fourth trimmed a 13-point Heat lead down to two five minutes into the period.

It’s a slight bit of nitpicking given how well Miami finished four of the six games, but the Heat can make things easier on themselves going forward by putting opponents away when they get the chance.

Given how shaky things looked at times, finishing 4-2 on this road swing probably looks pretty good for the Heat players and coaches coming home, and an 8-3 record is actually a bit encouraging given the team’s defensive struggles so far.

Miami will get 10 of its next 11 games at home, meaning it has plenty of practice time to deal with its problem areas, and has a golden opportunity to make a run up the East standings and take the No. 1 spot back from New York.