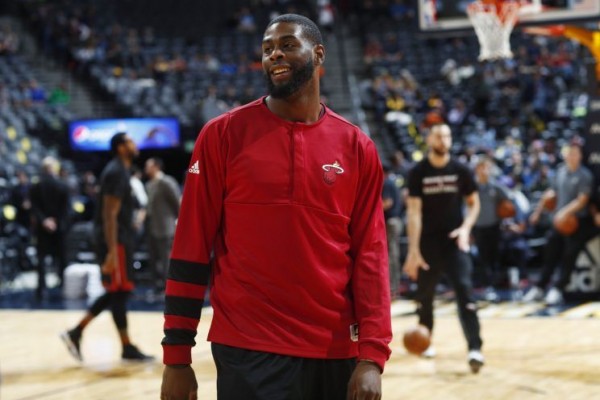 The NBA offseason has not gone how former Miami Heat center Willie Reed had hoped. After opting out of his contract with the Heat, Reed signed a measly one-year $1.5 million deal with the Los Angeles Clippers, despite many in the league believing he was worth more.

Now, Reed’s summer has taken a turn for the worse after the 27-year-old center was arrested Saturday night on a domestic violence charge of misdemeanor battery. Reed’s wife, Jasmine, reportedly told police that Reed pulled her hair and grabbed her before she hit him in the head with a glass candle to escape the scene.

According to the Miami Herald, the police noted several other signs of abuse:

The officer taking the report noted that Jasmine Reed “had red marks on her left wrist, right bicep, the right side of her chest and her back. She also had some swelling on her left foot.”

The arrest report went on to explain that the dispute began when Mrs. Reed told her husband that she wanted a divorce. It was at that moment that Willie Reed told his wife to leave their apartment, but to leave everything he had bought her behind, including her purse. He then grabbed the purse and when his wife fell to the ground he dragged her along until the purse’s strap broke.

She then ran to the lobby, only to return to the apartment to retrieve their two children. When she headed back to the elevator with her children, Willie Reed allegedly grabbed her hair to get her to put down them down and then twisted her arm and forced her to her knees. It was at that moment that she claims to have used a glass candle to hit him in the head, allowing her and the two children to escape to the lobby where she then called the police.

According to Reed, he never laid his hands on his wife but did admit to grabbing her purse, her shirt, and her hair. He spent Saturday night and Sunday morning and afternoon in jail before posting $1,500 cash bond.
[xyz-ihs snippet=”HN-Native-EndofArticle”]