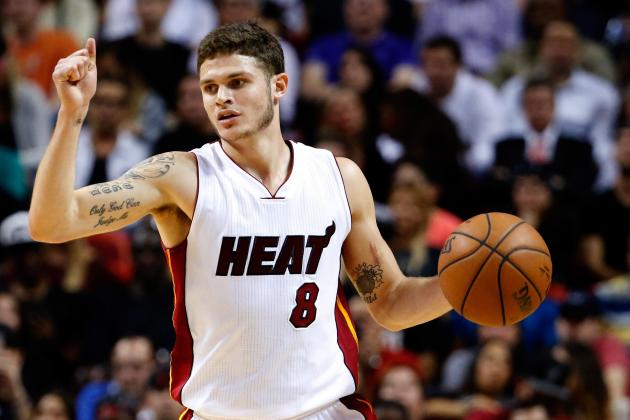 The Miami Heat announced that Tyler Johnson underwent successful surgery on his left shoulder on Wednesday.

The one-hour procedure was performed by Heat physician Dr. Harlan Selesnick at Doctors Hospital in Miami. The second-year guard will begin rehab immediately, however, there is no timetable for his return.

It was previously reported that Johnson’s recovery would take at least two months, but it now seems unclear when the 23-year-old guard will return to the lineup.

Head coach Erik Spoelstra said Johnson did everything he could to fight through the injury:

“He took it as far as a human being could possibly take it. And he’s been dealing with his shoulder for a long time, even since college. But last year, this summer, we’ve tried every solution other than surgery.”

As far as how the Heat will cope in the absence of their energetic guard, Spoelstra kept things simple:

“It just has to be different,. You feel really badly for Tyler, because he did everything you could possibly need to do to give himself a chance to play through it. It just progressed, so he kept on getting worse.”

Johnson’s injury comes at a time when the Heat were just starting to become fully healthy.

The North Dakota State product had appeared in 36 games with five starts and averaged 8.7 points, 3.0 rebounds and 2.2 assists in 24.0 minutes per game while converting on 48.8 percent of his shots from the field.
[xyz-ihs snippet=”Responsive-Ad”]