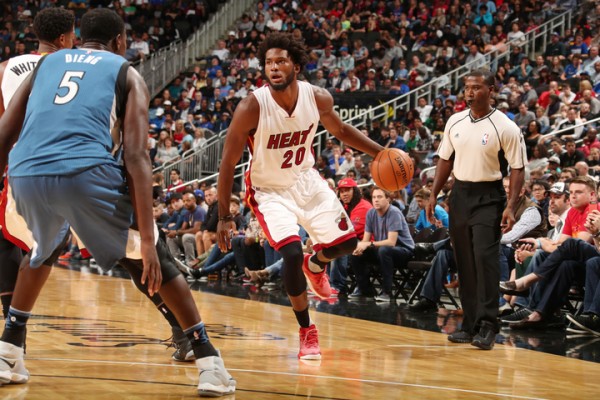 There was never really any doubt, but now we know for sure.

According to Ira Winderman of the Sun Sentinel, the Miami Heat have committed to moving in advance of the Oct. 31 deadline with a guarantee of the third year of Justise Winslow‘s rookie contract.

The team has until Oct. 31 to send in the official “exercise letter” to Winslow’s agent and the NBA league office. The letter will confirm that Winslow’s $2.7 million salary is guaranteed for the 2017-18 season.

Even though General Manager Andy Elisburg called the move a mere “procedure formality,” Winslow knows how cutthroat contract negotiations can be in the NBA.

“This is a business,” he said. “You’ve got to know every aspect of it. Of course, I felt 99 percent sure that they would pick it up, but it’s something that you’ve still got to be aware of. If not for yourself, you’ve got to tell other rookies coming down the line. Because this is a brotherhood. You want to look out for everybody.”

Winslow will step into the starting lineup after Luol Deng‘s offseason departure and will be given a larger role in head coach Erik Spoelstra‘s game plan. The Duke University product knows that his play will dictate whether or not the Heat continue to pick up his future options.

The Heat will face same the decision next October, and barring a drastic decline in Winslow’s play, they will most likely pick up his fourth-year option worth $3.5 million and lock him in for the 2018-19 season. This year’s move means that Winslow will be one of just five players (Tyler Johnson, Goran Dragic, Hassan Whiteside, Chris Bosh, and Winslow) definitively under contract for the 2017-18 season.

Hopefully, Winslow can step up his play this season and ensure that the Heat sign him to a long-term deal in the future.
[xyz-ihs snippet=”Responsive-Ad”]