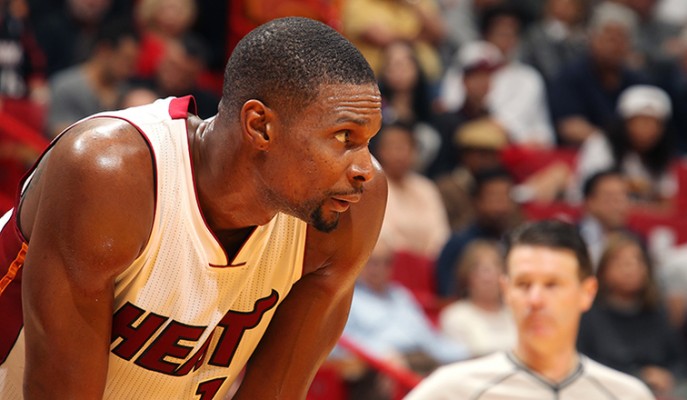 Heat president Pat Riley issued a statement to thank Bosh for the many contributions he made to the team during his time in Miami:

“Chris changed his life and basketball career when he came to Miami. And he changed our lives for the better, in a way we never would have imagined, when he joined the Miami HEAT,” Riley said. “We will forever be indebted to CB for how he changed this team and led us to four trips to the NBA Finals and two NBA Championships. He is, without a doubt, one of the greatest players in the history of the franchise.”

Riley went on to say that Bosh’s jersey will be retired by the team:

“The number ‘1’ will never be worn by another player and we can’t wait to someday hang his jersey in the rafters. Today, we are both moving on but we wish Chris, Adrienne and their family nothing but the best. They will forever be part of the Miami HEAT family.”

Along with LeBron James and Dwyane Wade, Bosh was an integral member of the 2012-13 and 2013-14 championship teams in Miami. He averaged 18.0 points, 7.3 rebounds, and 1.8 assists per game during his six seasons with the Heat.

Bosh’s release comes after recurring blood clots kept him off the court since midway through the 2015-16 season. Doctors have yet to clear Bosh to return to the NBA, and while he has expressed an interest in continuing his career, it is beginning to look like this release may force the All-Star power forward into retirement.

The release will greatly help the Heat continue to build around their young core as they will be able to clear $25.3 million off next year’s salary cap and will permanently remove his $52.1 million in remaining salary.

While no one wanted Bosh’s career to end this way, his release is clearly the best option for him and the team.
[xyz-ihs snippet=”Responsive-ImagenText”]