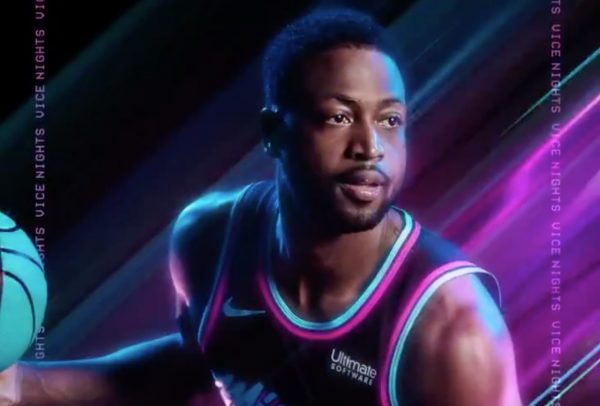 The highly anticipated Miami Heat “Vice Nights” jersey has officially made its debut as Dwyane Wade can be seen below sporting the new version.

The Miami Heat released their new jerseys and they’re FLAMES

FIRST LOOK: @MiamiHEAT follow up last year’s “Vice” jersey success with a black version for its City Edition Jerseys. Team will play in this ?for 14 games. First game is Friday. pic.twitter.com/2JFQhEy0Dk

The debut comes as a sequel to last season’s design. After Nike took over jersey distribution for the NBA, it launched a City Edition theme for each team. The City Edition concept allows teams to go outside of the normal jersey concept and integrate a piece of a franchise’s city into the design.

The “Miami Vice” design became amongst the most popular of turnouts, as fans celebrated and scurried to purchase and elevate its fame.

According to the Sun Sentinel, Heat chief marketing officer Michael McCullough states that the jersey theme will coordinate with a new matching court. Plans were thought of last season with the initial launch of the City concept, but were set into motion too late:

“I would say that was just a miss on our part,” he said. “When we were conceptualizing the uniform we thought about doing the court, but it was too late. By the time we started the process it was not going to give us enough time.”

“This was part of our plan from Day 1, when we heard of the City design concept,” he continued. “It just kind of coalesced that way. We thought that [the white version] was the one to launch the campaign and allow us to have a complete switch for the second year.”

The Heat will debut the new version on Friday against the Pacers at American Airlines Arena. The jersey along with “Vice Nights” brand apparel will launch for fans Thursday at midnight.
[xyz-ihs snippet=”HN-300×250-TextnImage”]