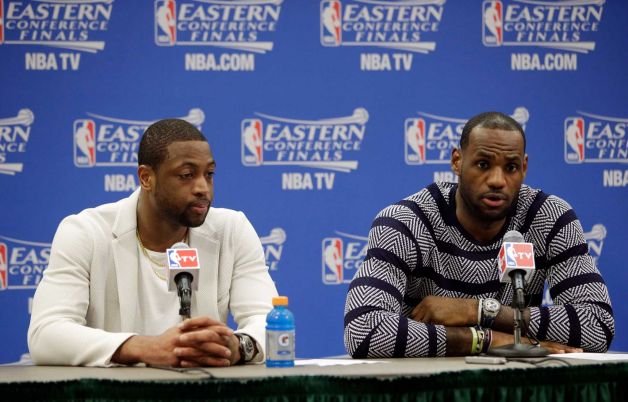 LeBron James always will be the headliner, but Dwyane Wade might be the most important player to the Miami Heat’s title hopes.  Wade is averaging 25 points through two games and shooting a blistering 64.7 percent from the field. His offensive efficiency is due in part to his decrease of 3-point attempts. In this Q&A with the media after Friday’s practice, Wade dishes on how the Heat can improve, learning from past disappointments and the importance of winning at home.

On carrying momentum from Game 2 into the rest of the series:

“For us, we haven’t played as well as we want to yet. We have other levels that we have to reach. I felt that, obviously, (in) Game 1 they played phenomenal. I felt that (in) Game 2, we played good. Our defense was darn good, giving up 83 points. But I felt our overall game wasn’t where we like it to be. And we figured out a way to win a ball game on the road when they had control of it coming down (to) the last three, four minutes. A good team found a way to win on the road versus another good team. But I don’t feel like we’ve played our best basketball, so we know we have to get to that level, where we’re playing Miami Heat basketball – and you guys know how that looks, when we’re all on one accord and we’re all playing together. So we have a lot more improvement we can do in this series.”

On previous failures during critical situations at the end of games teaching them not to panic:

“It (failure) is the best teacher for you. You have to go through it. We went through it in a tough way, after losing to Dallas in the Finals, that hurt … we had a chance to really win games and to win the Finals together, and we didn’t do that. So we came back a hungrier team … and we came back smarter when the next season came. We relished those moments; we had a lot of those moments and I thought we came out better from the previous year.”

On why they’ve thrived at home this postseason:

“I don’t know. We love playing here and we’re a pretty good home team. We know you have to win on the road to be a champion, but we also know it’s a must that you take care of home court. In the playoffs, we don’t like losing at home at all. But when you’re at this time of the year, these teams are good enough to beat you on your home floor, so we’ve got to come out and play a phenomenal game.”