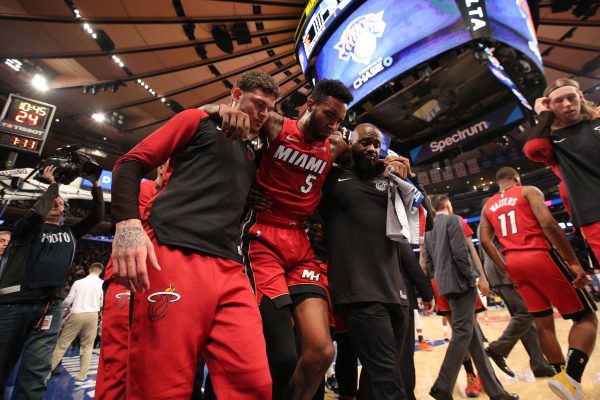 Miami Heat fans feared the worst when Derrick Jones Jr. collapsed to the ground during Sunday’s win over the New York Knicks.

While the injury seemed like it could have been a season ender for the talented youngster, it has now been reported that Jones Jr. suffered two right knee bone bruises, and will be evaluated in six weeks.

If Jones Jr. were to be able to return to the court in six weeks, it would give him just under a month to get back up to speed for any potential playoff run the Heat hope to make this spring.

While it will be hard to replace the 6-foot-7 forward who is enjoying something of a breakout season, it is great new to hear that the injury is not as serious as some initially feared.

Hopefully Jones Jr.’s ability to start rehabilitation immediately will encourage him to return to the court as quickly as possible.

As for the Heat, Jones Jr.’s absence will offer them the opportunity to display their deep rotation in the games to come.
[xyz-ihs snippet=”HN-300×250-TextnImage”]