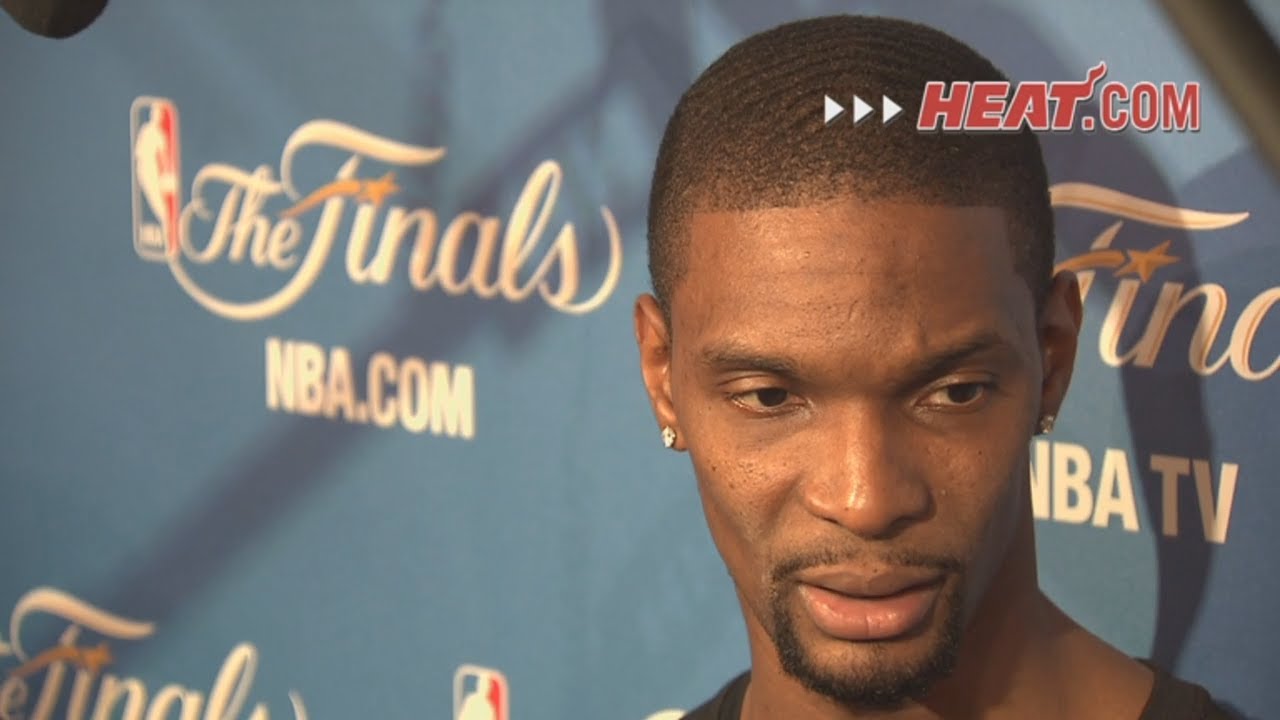 Chris Bosh gives one of the most honest interviews after losing Game 4 of the NBA Finals to go down in the series 1-3.

Bosh: “I’m just gonna get away from basketball for the next 24. You know, and kinda press the reset button and just have nothing going on for me right now. That’ll be the best thing for me individually and then we’ll attack it in a couple days.”

Reporter: You guys have never faced a deficit like this since you came together. What kind of approach and mindset does that require and how desperate of a moment is here for you?

Bosh: “Well, one at a time, everything one at a time. One practice, one shot, one pass, one meeting, one quarter, one game. So we’re forced to do that now and I believe in my guys. If anyone can do this, it’s us. We’ve seen our fair share of adversity in everything and this is adversity in all caps. So we’re just gonna have to have confidence in ourselves and if a guy has a single bit of doubt, then he doesn’t belong here and I know everybody’s confident here.”

Reporter: How much does the extra day off help in the decompressing?

Bosh: “Well, I’m glad we have an extra day off now just after everything’s that’s going on. We have to figure some things out. [The Spurs] are just carving us up on everything, getting everything that they want and we are not up to par. And we have to change that. So we’re gonna have to really really think long and hard about it and come ready to work.”

Reporter: Chris, is there any underlying thing in the locker room that’s been a distraction that might explain this?

Bosh: “No, it’s not a distraction, I think everybody’s been collective. Everybody’s together. Everybody wants to win and we gotta give ourselves a chance. That’s what’s crazy. I mean, we were in games 1 and 2 and then 3 and 4 we got smoked. We’re not even giving ourselves a chance. Sometimes, they’re gonna score on us when we do things and we just have to be a lot tougher to get this job done. So, we’re here now, there’s nothing we can do about it.”

Reporter: Chris, are those the shots you wanted offensively in the first half and just were missing as a group?

Bosh: “Yeah, we got great shots. I think we got great shots. We got great, great shots. We’re just missin’ em. I mean, Dwyane missed a couple layups, LeBron missed a couple layups. Open jumpers, we were workin ‘em on offense. Maybe we coulda got a few more layups. But, I liked the looks we were getting. I think Ray missed a couple wide open threes. That’s what’s tough about it, you know, especially in the beginning, we were down 10 points fast and we continue to do that to ourselves. Even in game 2 we were down 10 plus points on the road, so we’re getting beat down right now. We’re gonna have to hold on to the ropes and get back up.”

Reporter: Chris, their movement and passing, the extra passing to really be getting guys wide open that they’re able to get. Explain that in the last two games.

Bosh: “That’s what they do. That’s just what they do. They make the right pass, they’re a really unselfish team. There’s a reason they have the top two or three offense in the past few years. It’s just, they’re playing beautiful basketball right now. We’re going to have to have a better mindset and a better game plan to really defuse all that stuff.”

Reporter: Chris, fans have been harsh out there, do you deserve to get boo’d you think?

Bosh: “Life is harsh. You just have to get over those things pretty quickly. Maybe they’re right. Maybe we do deserve it right now.”

Reporter: Chris, I know you’re not gonna use this as an excuse but any health issues right now with the team, anybody more physically nicked up?

Bosh: “I mean, everybody’s physically nicked up. I’m sure they’ve got guys that are nicked up too. Tony had his ankle. Tim has his knee and everything. We’re not gonna use that as an excuse, we’ve played 100 something games this year, you’re gonna have bumps and bruises.”