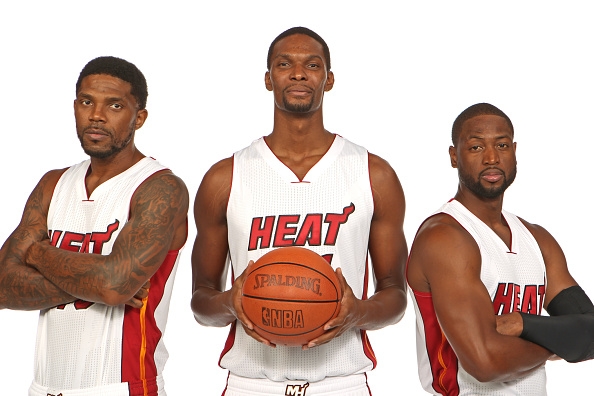 The Miami Heat will have three captains for the first time in nearly 15 years.

For the first time since taking over as head coach in the 2008-09 season, Erik Spoelstra has revised his list of Heat captains. While Dwyane Wade and Udonis Haslem have served as captains since Spoelstra’s first year, Chris Bosh will join that list this year.

Spoelstra downplayed naming Bosh as a captain, citing that he had already been acting as one recently:

“He already was acting as one, so that was an easy decision and one that basically didn’t need to be stated,” Spoelstra said before Friday night’s game against the Cleveland Cavaliers at Quicken Loans Arena.

Bosh, who is in his sixth season with the team, took it as a huge compliment to be named a captain for the first time in his NBA career:

“It’s definitely a privilege to be a captain of anything, but an NBA team, especially a championship organization like our organization, it’s a huge privilege. But it’s a huge responsibility, too. I don’t take it lightly.”

The 30-year-old veteran stressed that it’s vital he doesn’t take a step back vocally:

“I always want to make sure that I’m being a vocal point. If I’m not being vocal, I’m setting an example. It’s hugely important to me. I don’t want to just all of a sudden have a title and I haven’t being doing the same thing I’ve been doing for the past couple of years.”

Prior to the 2008-09 season, Haslem had served as the lone captain of the team during the 2007-08 campaign. In the two seasons before that, Miami did not have a team captain.

Considering Wade, Haslem and Bosh are three of the longest-tenured members on the roster along with Mario Chalmers, it only makes sense for the trio to serve as captains for the franchise.

The last time the Heat had three captains was in the 2001-02 season, when Alonzo Mourning, Brian Grant and Eddie Jones served in that role.
[xyz-ihs snippet=”Responsive-Ad”]